There Is a Reopening Rally Going on at Disneyland Right Now! - Inside the Magic 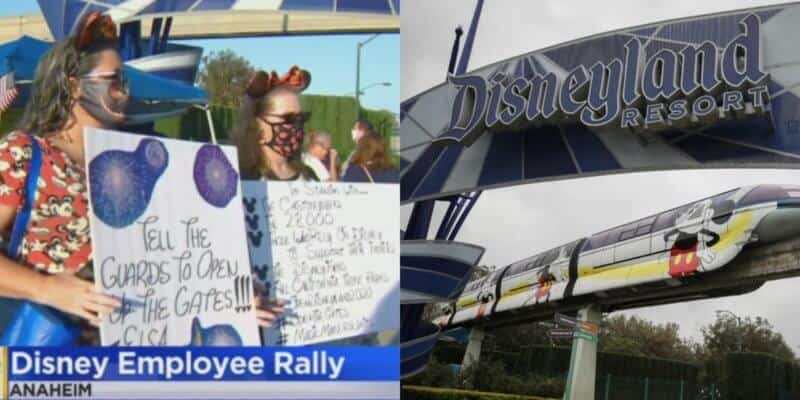 There are currently Disneyland fans rallying outside the gates of the Disney parks to urge the state to re-open the magic.

Earlier this week, we reported that a group of Disney fans decided that they were going to hold a #OpenDisneyland2020 for the Magic Makers Unite rally on Saturday, October 17th.  Well, today is the day, and at around 8 a.m. this morning, hopeful Disneyland park-goers began protesting to re-enter the parks once again.

The rally began as a Facebook group where organizers Natasha Ramirez and Desi d’Amani stated that they were rallying for the 28,000 Cast Members who lost their job. According to Parks Chairman Josh D’Amaro, a majority of this number is a direct result of Governor Newsom not reopening Disneyland, despite state officials seeing no health or safety concerns upon a recent. Although it seems that this rally is on the same side as Disney officials in terms of a collective goal of reopening Disneyland, this rally is not organized by Disney.

Twitter is booming with photos from today’s rally. Theme Park Wizard took to Twitter to showcase a few signs. If you listen to the video, you can hear rally members chant “Let me in, Let me in!” It seems that the rally did not boast a huge crowd, but those who are there are passionate.

Cool signs at the reopen #disneyland rally but the rally itself is much smaller than I anticipated pic.twitter.com/VEm1MQkW9l

If you want a closer look at the small size of the rally, Twitter user TASG Marc took a photo of the rally from a wide-angle. Rally members are on Harbor Street right in front of the Downtown Disney sign. Disneyland Guests are protesting to re-enter Disneyland and Disney California Adventure to help save Anaheim citizens their jobs before longer closures mean more possible cuts.

The reopen Disneyland "rally". I saw more people at LAX on Monday than this ???. And to what audience? There was like 3-4 cars on Harbor pic.twitter.com/oFjpL7OIA8

Although the rally may not be huge in size, it is being talked about and was even reported live on KCal 9 News today. If you want to check out the news footage, watch it here!

Note that in addition to the “Magic Makers Unite” rally, a second rally was also planned for today by a different group. The second rally reportedly co-opted the first and had the goal of spreading the message to recall California Governor Gavin Newsom. Although the “Recall Newsom” protesters were in attendance of the Disneyland reopening rally on Harbor Blvd. this morning, a majority of their protesters were across the street, and the rally remained peaceful. One of the Disney Cast Members who organized the “Magic Makers Unite” rally issued a disclaimer that their was not intended to be political, but also that she could not control who attended.

The rally comes as Disneyland Guests await Governor Newsom to reopen the parks. The CAPA has offered their help to Newsom to create safe and efficient reopening guidelines for theme parks, but with Newsom in no hurry to open the gates, many of us are feeling like Anna in her castle with Elsa. Disneyland has now implemented measures suggested by CA health and safety officials, to which state officials reviewed and seemingly had no changes to make.

Note that, as a reminder, this rally took place outside the Disneyland Resort gates, as rallys of any kind are not permitted on Disney property.

Learn more about this “Reopen Disneyland” rally on the event’s official Facebook page.

Stay tuned to ITM as we continue to track the reopening status of Disneyland Resort.