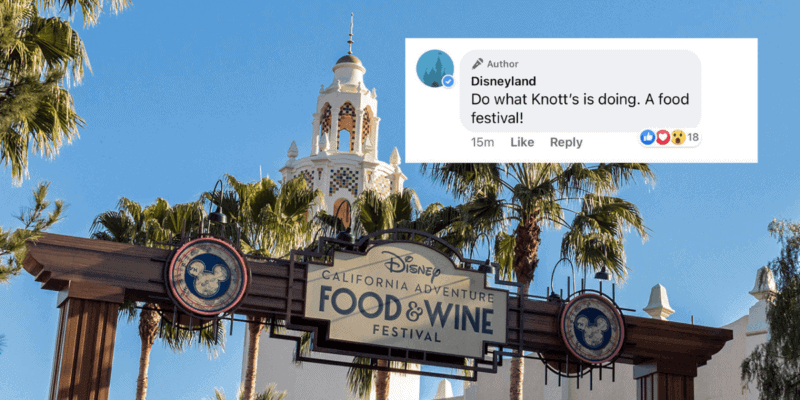 We’re all getting excited for part of Disney California Adventure to reopen in November. But did Disneyland just hint that a food festival is coming soon, too?

In the image below — posted to Twitter by @popcenturystan — it appears that Disneyland has hinted (perhaps accidentally) that Disney may be considering bringing a food festival to Disney California Adventure. Take a look at the comment, which says, “Do what Knott’s is doing. A food festival!”:

Keep in mind that, since this comment was posted, it has been nowhere to be found and appears to have been deleted. Chances are it was shared completely by accident.

But if Disney is considering following in another park’s footsteps, this also wouldn’t be the first time Disney has apparently taken notice of what Knott’s Berry Farm has been up to.

Over the summer, we shared an article suggesting that Disneyland should host a “Taste of Main Street” event, not dissimilar to the recently announced reopening of Buena Vista Street. In that article, we note that, according to FreshBaked, attendees at the local Knotts Berry Farm theme park’s summertime Taste of Calico event reportedly spotted a few Disney Park executives at the park. And if Disney officials have been, in fact, checking out the Knott’s events (which are quite similar to the Disney California Adventure Food & Wine Festival, typically hosted annually in the spring), then it’s quite possible that they got some ideas for how they can open shopping and dining at one of the Disneyland Resort theme parks without actually reopening the theme parks.

Additionally, the Food & Wine Festival at Disney California Adventure was cut short this year. The 2020 DCA Food & Wine Festival was originally supposed to run from late February through late April. But because Disneyland and DCA began their temporary closure on March 14, Guests only got to experience the first two weeks of the annual food festival before the parks closed.

Disney has already confirmed that there are currently no plans to reopen Main Street, U.S.A., in Disneyland for the holiday season. Right now all we know is that Buena Vista Street in Disney California Adventure will be reopening for Guests to peruse the shops and dine on some classic DCA eats. But are there plans to bring a Food & Wine-style festival back to DCA in 2021, much like the food and drink events that Knott’s Berry Farm has been hosting since the summer?

We shared recently that, based on our experience at the most recent Food & Wine-style event at Knott’s — the Knott’s Taste-of-Falloween — we think it’s pretty reasonable for Disneyland Resort to bring back Food & Wine at DCA in 2021 before the California Disney Parks are allowed to fully reopen. And, given what appeared to be Disneyland suggesting that a food festival should come to Disney California Adventure, this might be in the works already.

Note that Disney has not officially announced that a food festival is coming to any of the California Disney Parks anytime soon. But as soon as more information is revealed about the reopening of Buena Vista Street in Disney California Adventure or Disneyland Resort theme park operations overall, we’ll be sure to update Inside the Magic with the latest details.

Do you want Disney to bring a food festival to Disney California Adventure? Are you excited for Buena Vista Street to open in November? Let us know in the comments!