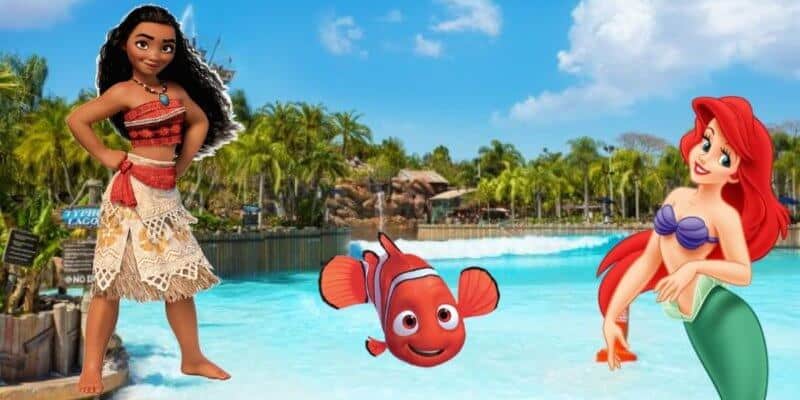 Walt Disney World currently has two water parks on property — Blizzard Beach and Typhoon Lagoon — both of which are incredibly themed and filled with unique attractions and activities.

Disney’s Blizzard Beach is home to several different water-based attractions including water slides (like the famous Summit Plummet and Slush Gusher), a lazy river (called Cross Country Creek), a wave pool (called Melt-away Bay), and more! Guests can enjoy the best of both winter and summer — at the same time!

And Disney’s Typhoon Lagoon is home to one of the largest wave pools in North America! It also features kids’ areas, cabanas, family rides, lazy rivers, surf lessons in the surf pool, thrill rides, and more!

However, personally, I don’t see the “Disney tie” in either of these water parks and I would love to see Disney build a third water park, based on some of the most iconic Ocean themed Disney movies. I’m talking Moana, The Little Mermaid, Finding Nemo, and more.

Each section of the water park could be based on a different movie — Similar to how Magic Kingdom is set up with the different lands. But what would each section include? Well, here are some ideas.

Disney is already working on a Moana attraction over at EPCOT called “Journey of Water”, which will be almost like a “walkthrough maze” featuring the goddess Te Fiti that “will let guests interact with magical, living water in a beautiful and inspiring setting.” Something similar could be done inside a water park!

Disney could build a raft water slide attraction which allows Guests to rush past famous scenes from Moana, including the Kakamoro fight scene, the famous storm scene, and even witness the goddess Te Fiti up close and personal.

Over in The Little Mermaid section could be where the lazy ride is found. The tubes could be shaped like seashells and mermaid tails and each Guest could climb aboard one of the themed tubes as they float around Atlantica.

Guests will see some familiar scenes along the way including Ariel’s Grotto, Prince Eric’s Castle, The Sunken Treasure Ship, and maybe even Ursula’s Lair.

Every water park needs a wave pool, right? So, this could be where the Finding Nemo themed wave pool is found. Similar to the pool at Art of Animation, this wave pool could be themed off of Finding Nemo and be called “The Great Blue World”. It could have statues featuring some of our favorite fish friends from the Disney Pixar film as well as under the water have some fun unique tidbits along the walls of the wave pool.

Okay, so I know Peter Pan isn’t entirely based in or around an ocean, however, Neverland is absolutely stunning and does have a decent amount of ocean surrounding it. I think Disney could bring in elements of Neverland to a water park — Maybe have the smaller children’s playground area themed into a Peter Pan section. It could include Skull Rock as an icon and Disney could build Captain Hook’s Pirate Ship as a splash play zone. They could also have a smaller kid pool themed off of Mermaid’s Lagoon.

What do you think? Should Disney build a third water park? Let us know in the comments below.

Editor’s Note: The opinions reflected in this article do not necessarily reflect Inside the Magic’s views overall.