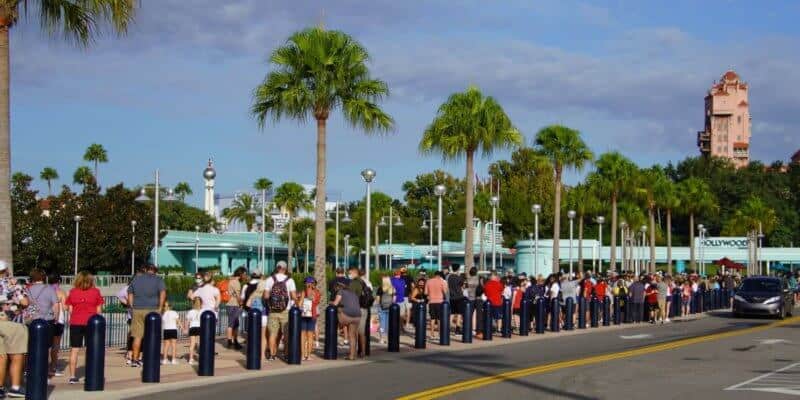 It’s safe to say that ever since Walt Disney World reopened to Guests in mid-July, Disney’s Hollywood Studios has been the most popular and high-demand theme park on property. This is most likely due to the extremely popular and highly anticipated Star Wars: Galaxy’s Edge, home to Rise of the Resistance and Millennium Falcon: Smuggler’s Run.

With Rise of the Resistance only operating with boarding groups, and no stand-by line, Guests are eager to get to Disney’s Hollywood Studios first thing in the morning to try and snag a boarding group for their party — which tends to draw a lot of Disney World crowds.

Guests tend to line up at the Disney park gates way before park opening as they have to be inside the park beforehand to get a boarding group. As you can see, in @bioreconstruct’s Tweet below, Guests lined up before 9 a.m. this morning to prepare for the park opening.

The photo below was taken at the Disney park at 9:10 a.m., which shows the queue to get into temperature check and then through the gates to the theme park. However, what is just remarkable is Disney’s way of handling these morning rushes.

@bioreconstruct said that once the temperature check opened up, the queue continuously moved at a steady pace and they were through temperature check, security, and at park entry within 20 minutes.

The speed and efficiency of early entrance to DHS is remarkable. Seen here is queue 9:10 just prior to temp check opening. When opened, a near continuous walk into park. Through temp check, security, and tap entry. Park open at 10. pic.twitter.com/vgqCjJ8IqJ

We at Inside the Magic commend Disney Cast Members for all that they do day in and day out. Not only do they handle crowds to the best of their ability, but they also ensure social distancing and proper face coverings are in place while also juggling to create magical moments and memories for Guests each and every day.

We know Cast Members have been on a lot of people’s minds lately ever since the announcement of Disney laying off over 28,000 Cast Members due to the pandemic. Our thoughts and prayers are with all of those who are affected and we want to be able to help you in any way we can. That’s why we wrote an article — How to Help Disney Cast Members Amid Layoffs and Park Closures — which you can check out as well if you are looking for ways to help these CMs who are struggling during this unprecedented time.

Thank you, Cast Members, for all that you do.