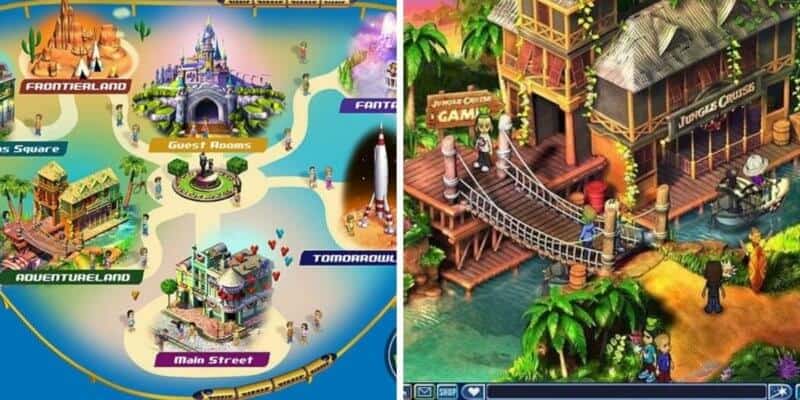 In case you have no idea what I am referring to, these were all extremely popular room games from the massive multiplayer online virtual computer game, VMK, which stands for Virtual Magic Kingdom.

The History of VMK

VMK was created by The Walt Disney Company and was a virtual representation of Disneyland park. It was initially launched as part of the Happiest Celebration on Earth promotional campaign, which commemorated 50 years of Disney theme parks 15 years ago.

Within the virtual online game, you could create an avatar and then go exploring the theme park, which included very close representations of Main Street U.S.A., Tomorrowland, Fantasyland, Adventureland, Frontierland, and New Orleans Square. You were able to visit some main attractions including Haunted Mansion, Pirates of the Caribbean, and Jungle Cruise as well as famous shops like the Emporium.

Also included in VMK were incredibly designed Guest Rooms, in which players could decorate to their liking, or host fun in-room games such as those that I mentioned earlier — “Falling Chairs,”  Don’t Hit the Floor,” “Races to the Throne,”  “Disney Trivia,”  and “Cute or Boot.”

In case you aren’t familiar, or if you just want to take a stroll down memory lane, “Cute or Boot” was a beauty pageant/fashion contest game, “Falling Chairs” was a game where the owner of the room dropped chairs while other players raced to them (almost like musical chairs in a way), and “Don’t Hit the Floor!” was a game where six players stood on boxes as the owner rolled a die to determine which player would loose a box (the goal was to be the last player standing on a box).

As mentioned earlier, as players explored the theme park, they could visit some classic and main attractions including Haunted Mansion, Pirates of the Caribbean, and Jungle Cruise. But the best part was that these attractions were turned into fun mini games.

The Pirates of the Caribbean mini game was similar to Battleship, where two teams had to shoot cannons at one another to eliminate the other team. In Haunted Mansion, the objective was similar to GhostBusters where you had to capture as many ghosts as possible. And Jungle Cruise was like a photo safari where players drove a boat and took photos of animals while avoiding obstacles.

Personally, my favorite part about this game, and one of the main reasons why I wish Disney would relaunch the game, were the quests. There were two types of quests in VMK — in-game quests and in-park quests.

In-game quests were like scavengers hunts that involved a series of tasks for players, such as finding a specific room or an item in the room. If players were able to complete the quests successfully, they were awarded a prize.

These were my all-time favorite. For the first two years of VMK, there were in-park quests, which allowed players to earn special and extremely rare in-game prizes. The quests were printable and players were able to take them to Disneyland Resort or Walt Disney World Resort. Once completed, you would bring the completed quest to the VMK Hub within the parks in exchange for cards with unique codes on them. Once back home, you could enter the code into your profile and the rare prizes and items would generate within the game.

Why Disney Needs to Bring Back VMK

Disney discontinued VMK on May 21 2008 because the game was, according to Disney, just a promotion and said that “all good promotions must end.”  This left many players extremely upset and disappointed, including myself. VMK was a way to connect with Disney fans from all around the world while also pretending you were visiting Disney each and every day from the comfort of your own home.

I know I played VMK all of the time, talking to other Disney fans about upcoming vacations, Disney movies, Disney shows, and so on. I met so many people from all around the world and was able to share my passion for Disney with others who understood and shared the same passion. I loved playing the in-room games, especially Disney Trivia, as well as playing the mini games such as Pirates of the Caribbean and Haunted Mansion. Being able to “visit” restaurants like Blue Bayou and Sci-Fi Drive In while I wasn’t really visiting the parks, helped fill that void of wishing I were really there.

VMK was one of the best games Disney ever created and I really wish they would bring it back once again.

What do you think? Should Disney revive VMK? Let us know your thoughts in the comments below.

Editor’s Note: The opinions in this article don’t necessarily reflect the opinions of Inside the Magic overall.