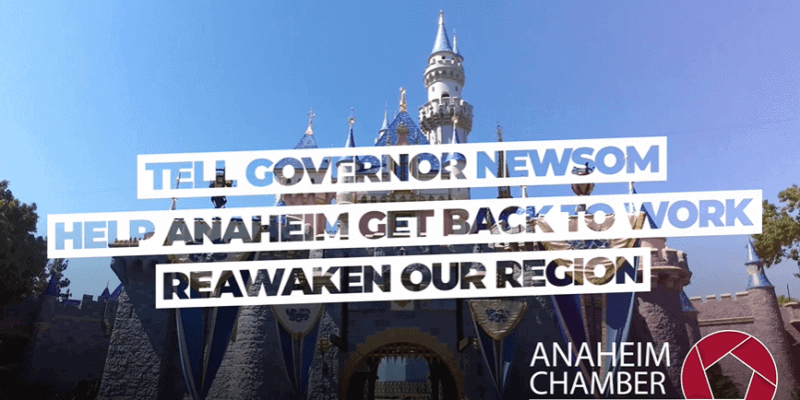 The commercial (being referred to by some as the “reopen Disneyland commercial”) was released by the  Reopen O.C. Now coalition of Anaheim, Buena Park and Garden Grove city leaders and the Anaheim Chamber of Commerce just one week after their press conference overlooking Disneyland Resort.  It calls upon Governor Newsom to move toward allowing the county to reopen, with Disneyland Resort paving the way.

“It’s time to responsibly reopen and get us back to work,” the commercial says. “And no one can do it better than Disneyland Resort. Anaheim is proud of the work we do and ready to roll up our sleeves and get back to it. Tell Governor Newsom to help Anaheim get back to work. Let’s reopen theme parks and reawaken our region.”

Below is the full commercial (which references the reopening of the California theme park), courtesy of OC Register:

“The time is now to reopen theme parks and restore the economic vitality we’ve lost over the last six months,” Todd Ament, President and CEO of the Anaheim Chamber of Commerce, shared on September 17.

The sentiments expressed in this commercial are not unlike those shared by Disney Parks officials. Disneyland Resort President Ken Potrock shared just where Disney is at in terms of discussions with Governor Newsom surrounding the reopening of the southern California Disney Parks.

“We’ve been waiting for guidelines from the governor’s office,” Potrock said. “We’ve made many, many, many recommendations as to what those protocols should be. We’ve offered to help with guidance so that we can get to a place that would be reasonable for us to open. Unfortunately we haven’t received that guidance. We continue to read things from the governor’s office and press clippings that talk about guidance is imminent and coming soon and we’re really, really close…I hope that’s true. We have been having ongoing conversations with staff at the state house level, both on the economic development side and on the health side.”

And Disney Parks, Experiences and Products Chairman Josh D’Amaro has expressed similar feelings. He has shared that Disneyland and Disney California Adventure have been ready to reopen for months.

“For communities such as Anaheim and Orange County, CA, Disneyland Resort is a crucial part of the economy,” the Disney Parks Chairman stated in a presentation earlier this week. He noted that nearly 80,000 jobs rely on Disneyland operations.

D’Amaro shared, “To our California government officials particularly at the state level: I encourage you to treat theme parks how you treat other sectors…the longer we wait, the more devastating it will be to Orange County and other communities.”

We will update Inside the Magic with more information pertaining to the reopening of the southern California theme parks as it is announced.