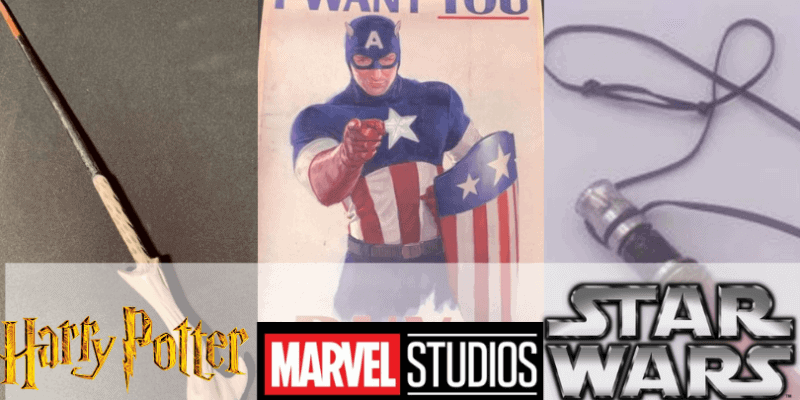 An online movie prop auction is taking place right now at the iCollector website. The event will take place over the next two days and will feature hundreds of famous props and set items ranging from $5 to many thousands.

Excitingly for us magic fans, the auction will feature a number of pieces from Star Wars, the Marvel Cinematic Universe, Harry Potter, and more.

Let’s take a look at what we can expect to see from this amazing auction of iconic Hollywood memorabilia!

Movie props for sale at iCollector

There are many hundreds of items up for auction at iCollector, but here are a few of our favorites.

This Gringotts gold coin will start at $200 and is expected to sell between 200 and $400. The item description regrettably doesn’t mention which Harry Potter film the item is from, though the bank is most prominently featured in The Deathly Hallows part 2 and The Sorcerer’s Stone, so it’s likely from one of either the first or last movie!

Now, this is pretty cool. This ball cap is from the set of Avengers: Age of Ultron and was given to members of the crew to wear throughout production. The Avengers logo looks pretty rad with this British paint-job, if you ask me. The item starts at $75 and is expected to sell for up to $150.

Perhaps two of the coolest props for sale are also from the Harry Potter franchise. Starting at a whopping $4,000 you too can own the most sinister wand in the Wizarding World! Yes, Lord Voldemort‘s wand is up for grabs.

The stunt wand used by Ralph Fiennes is made of resin and is described as being used ‘throughout the Harry Potter franchise’, though it’s already being bid on as we write, so act fast!

Equally cool is the most famous Quidditch ball, the Golden Snitch. This FX Snitch was used in the first two movies as an object for actors to chase when pretending to try and catch the golden wonder. This amazing piece of Hollywood memorabilia is a must for any fan of Chamber of Secrets or Philosopher’s Stone!

Finally, no Hollywood movie prop auction would be complete without representation from the Star Wars universe. There are a number of Star Wars related items, but this kyber crystal necklace takes the cake for us. It was used in pre-production of The Last Jedi and features a lovely leather neck strap. It starts at $1500.

Check out the entire range of Hollywood items available to bid on the iCollector website. Other props include Captain America’s helmet from the First Avenger, as well as a piece of Iron Man’s iconic helmet that’ll make you look every inch an avenger. If you’re in the market for movie memorabilia or you don’t have a local prop store, you’ve got to check out this live auction!

The auction also features television props from shows like Marvel’s Agents of Shield. Other Hollywood franchises that feature include Jurassic Park, horror films like Van Helsing and more Marvel Cinematic Universe movies like Spider-Man: Homecoming and Thor: The Dark World.

Props from non-Marvel superhero movies like Aquaman are also up for grabs. Basically, if you want a piece of movie history on your wall, act fast as this live auction of Hollywood memorabilia concludes tomorrow!

Which item will you be bidding on? Let us know in the comments below.

Comments Off on Live Prop Auction Features Items from ‘Harry Potter,’ Other Films