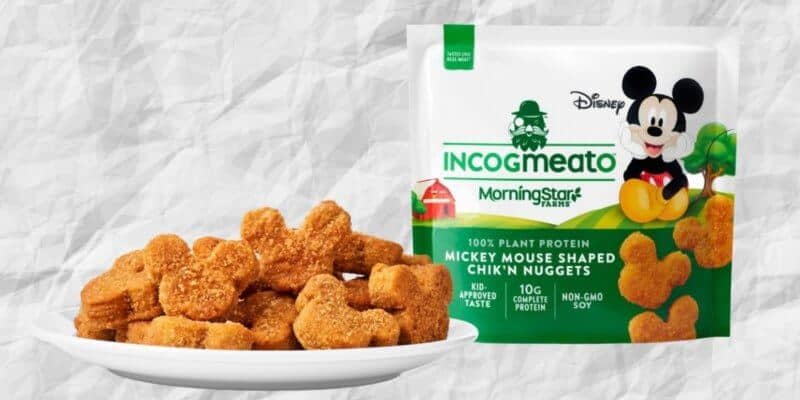 As a vegetarian for almost 10 years, and as a lifelong Disney fanatic, I am extremely excited to announce Disney’s new partnership!

Kellogg Company announced that its brand, MorningStar — a plant-based company — has teamed up with Disney to bring us adorable Mickey-shaped vegan “chicken” nuggets! (I mean, everything tastes better Mickey-shaped, am I right?)

According to VegNews, Sara Young, General Manager, Plant-Based Proteins at Kellogg Company, said “We saw a craving for more family friendly plant-based options and as a mom myself I knew we had a big opportunity with Incogmeato. We are so delighted to be working with Disney to help land plant-based proteins on the plates of kids nationwide.”

These new Mickey vegan “chicken” nuggets will be sold in the frozen section of your local grocery store for $6.99 per 13.5-ounce bag. They contain 57% less fat and 35% less sodium than animal-based nuggets!

“Disney is committed to offering more plant-based foods, we are excited to be working with Incogmeato on the first-ever plant-based Mickey Mouse shaped nuggets,” John T. King, Vice President of Consumables Licensing at Disney. “By creating foods that kids love and with the nutrition parents can feel good about, families can experience the magic of Disney during meal time.”

This isn’t the only time recently that Disney has launched new plant-based food items. Over at the theme parks, ALL of the major quick and table service restaurants are now serving plant-based options on both coasts — Walt Disney World in Florida and Disneyland in California. There is also a new vegan menu icon (along with a new website) which has been added to Disney dining so you can easily find the options for you. Guests can now choose from hundreds of both sweet and savory dishes, including several brand new dishes as well!

The Walt Disney Company stated “We’re always looking for ways to bring more flavor, innovation, and creativity to the Disney dining experience – and guest feedback is first on the menu when we evolve our menus and develop new dishes. Our guests have embraced our plant-based offerings at our parks around the globe, inspiring us to expand our menu and introduce a new menu icon, a green leaf, that will make it easier than ever to find these creations during your visit.”

Are you going to be heading to your grocery store and trying these new Mickey-shaped vegan nuggets? Let us know in the comments below.