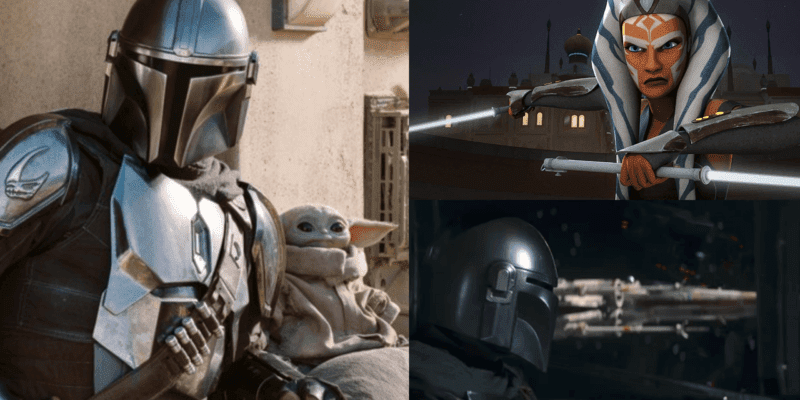 Get ready to say ‘This is the Way’ to every sentence in your house again as The Mandalorian season 2 trailer just dropped.

We noticed a few interesting details that we thought we’d share with you. Firstly though, take a look at the trailer if you haven’t done so already:

"Wherever I go, he goes." Watch the brand new trailer for #TheMandalorian and start streaming the new season Oct. 30, only on #DisneyPlus. pic.twitter.com/ZwuOkwwhOY

Okay so we have to talk about this, did we just get our first look at Rosario Dawson as Ahsoka Tano? While she is lacking the more obvious features that she sports in the Clone Wars, this looks like Dawson to us:

Also, combined with the fact that this character appears just as the Jedi are referenced? It has to be her! The quote for reference:

If this is Ahsoka, why doesn’t she look like this?

Well, there are three theories we here at Inside the Magic have:

Update:  This is highly likely to be Sasha Banks playing Sabine Wren from Star Wars Rebels and would certainly relate nicely into the dark saber storyline! It does beg the question, when are we going to see Ahsoka?

Everyone’s favorite ships make an appearance in the trailer and appear to be flying alongside Mando rather than working against him:

It’s unclear just how important the old Rebellion (and future Resistance) are going to be in season 2 but we’d expect them to play a larger role as the show progresses beyond this season.

The character that took the world by storm features heavily in the trailer and we can’t wait to see him back on our screens again. It looks like he’s going to be causing more trouble for Mando and the gang!

The new trailer is the first time we have properly heard the Jedi mentioned by name in the world of The Mandalorian. It is worth keeping in mind that at this point in the Star Wars timeline we know that Luke Skywalker and Ahsoka Tano are alive and well.

Will the show make references to Luke and his intentions to restore the Jedi Order? It all remains to be seen but we can’t wait to see what the Disney+ original has in store for us when it arrives at the end of October.

Let us know what you think of The Mandalorian season 2 trailer in the comments below!