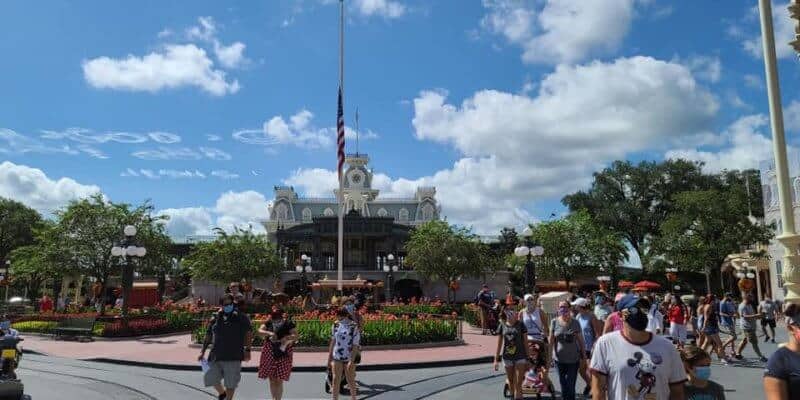 If you walk into Magic Kingdom today, you will notice the American flag is flying at half-staff. Although there are many American flags in the Magic Kingdom, the only official flag is the one right before you enter Main Street, U.S.A. as the others do not have the proper amount of stars.

The flag is flying at half-staff today as the world mourns the loss of an incredible woman who passed away yesterday, September 18, 2020: Ruth Bader Ginsburg. As a sign of respect to her life, as well as everything she has done for the people of the United States of America, Disney has chosen to lower the flag.

Who was Ruth Bader Ginsburg?

Ruth has a very long career in both law and American politics. Most notably, the Notorious RBG  was an Associate Justice of the U.S. Supreme Court and held that seat since 1993. Appointed into the Supreme Court by Bill Clinton, RBG has been a huge role model and advocate for gender equality for the past 27 years. She is also the second woman to have ever been appointed a seat in the court. Ruth battled 5 rounds of cancer and passed on her fifth round against complications from metastatic cancer of the pancreas at age 87.

When else has the flag run half-staff?

Disney will run the flag half-staff on holidays such as Memorial Day and for people like Ruth, to acknowledge the passing of a very respected member in our society.

All of us at Inside The Magic wish our best to Ruth’s family and friends during this time.