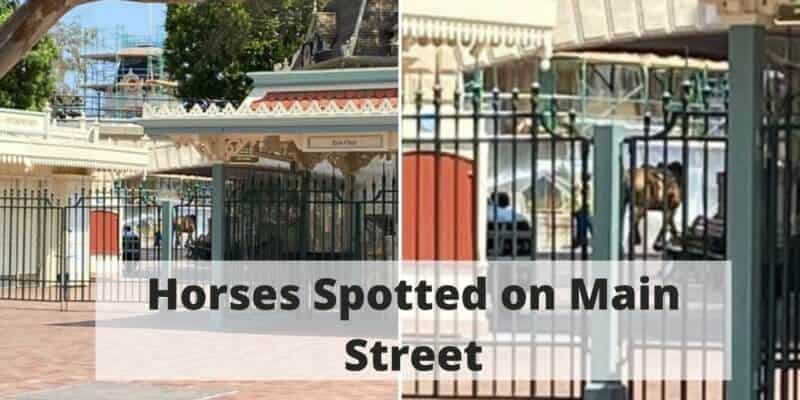 With the anticipation of Disneyland releasing a reopening date at any point, us fans are ready to hear it! When both Disneyland and Disney California Adventure shut their gates on March 14th, 2020 due to the pandemic, no one could have guessed the park would be closed for 6 months and counting.

After the two parks had to forgo their originally scheduled opening on July 17, it has truly been like a waiting game. And while we wait, we have all had our eyes wide open to catch any clue that could indicate when we are able to revisit the Happiest Place on Earth!

Latest spotting of activity at Disneyland

Today on twitter we saw that Disneyland had horses being walked down Main Street. Does this mean the park will be opening soon? That is not something we know for certain at this point, but seeing “life” come back to Disneyland amid the pandemic is surely a good sign!

Horses being walked on Main Street at #Disneyland photo from Christie.reynoldss on ig pic.twitter.com/q3eeSYi1Vc

Plus watching the horses gallop down Main Street is a magical sight that I cannot wait to see again at the theme park!

Why could the Disneyland horses be roaming around now?

From the opening of the parks in Walt Disney World, we know that cavalcades are the new sort of parade. The cavalcades are trolleys, cars, and vehicles really that can carry loads of Disney characters on them. The characters have been seen going around the Orlando parks, primarily at Magic Kingdom. Some of the cavalcades are lead by horses as well which allows us to speculate that this may be why the horses are being reacquainted with their old home.

We have also seen both Merida and Gaston walking down Main Street, U.S.A. towards the castle on horse at Magic Kingdom, so perhaps this is something we will get to see at Disneyland!

Of course we are still awaiting official notice that the parks will be opening up once again, we have seen that landscaping is being done, the Emporium is being refurbished, and Avengers Campus is moving quickly towards the finish line. There is definitely lots going on at Disneyland, and we also know Josh D’Amaro,  Disney Parks, Experiences and Products Chairman, has said that Disneyland has been ready to open since it’s original date back in July. We will likely be seeing a phased reopening of the theme parks when that day comes.

So what do you think? When will Disneyland reopen? Let us know below!