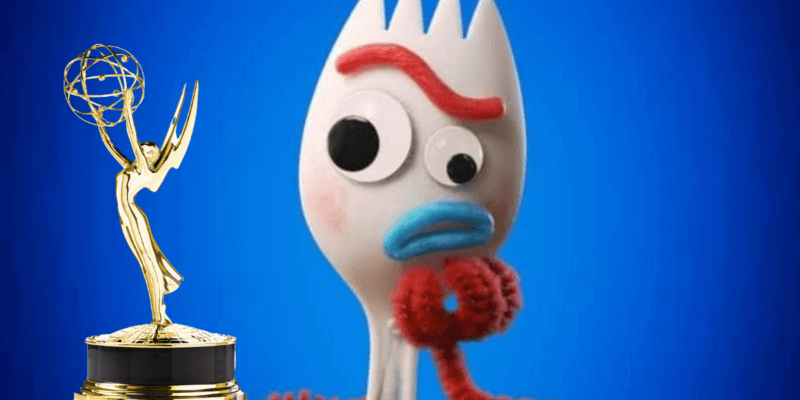 Another Disney+ show has taken home its first Emmy. After Star Wars: The Mandalorian‘s victory, Pixar’s short series Forky Asks a Question took home the Emmy for Outstanding Short Form Animated Program for the episode titled “What is Love?”

Congratulations to the team behind #ForkyAsksAQuestion: What is Love? on its Emmy® win for Outstanding Short Form Animated Program! #Emmys2020

According to Deadline,  show creator Bob Peterson and producer Mark Nielsen accepted the award on the 4th night of the Creative Arts Emmy Awards through pre-recorded speeches.

Along with his family, Peterson gives thanks to lead voice actor Tony Hale, along with the quartet of “comedic geniuses” who appear in the Emmy-winning episode, including Carol Burnett, Mel Brooks, Betty White, and “the late, great Carl Reiner.”

Forky was introduced to Pixar fans in Toy Story 4. Created by Bonnie, Pixar’s Toy Story Universe’s new character was made out of a spork, pipe cleaners, a popsicle stick, and some googly eyes, and knew nothing of the world but trash. At the end of Toy Story 4, he has accepted his new life as a toy rather than trash, but he still has a lot to learn about his new world.

That is where this series takes off.

Disney describes Forky Asks a Question as the following:

Forky, from Disney and Pixar’s TOY STORY 4, is a craft project created from trash, so he has important questions about how the world works, such as: What is love? What is time? And of course, the deepest question of all, What is cheese? He explores all of these questions and more in a collection of 10 shorts called “Forky Asks A Question”, exclusively on Disney+.

Disney+ received 18 Emmy Award nominations this year, 15 of which were for The Mandalorian.

Are you surprised Forky Asks a Question won? Why or why not? Let us know in the comments!

Comments Off on ‘What is an Emmy?’ Pixar’s ‘Forky Asks a Question’ Wins First Award