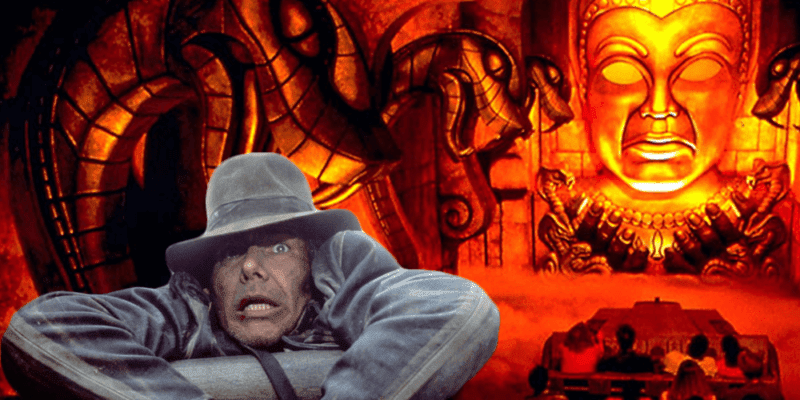 Since 1995, Indiana Jones Adventure: Temple of the Forbidden Eye has entertained millions of guests at Disneyland in Anaheim, California.

Widely regarded as one of the best attractions in a theme park history, Indiana Jones Adventure is a must-stop for all Disneyland visitors. In one sitting, guests travel through a doomed temple, escape the jaws of a ginormous snake and dodge a rolling boulder the size of a house!

Follow Indy’s footsteps into the crumbling Temple of the Forbidden Eye past intricate booby traps. Inspect carvings and frescos that tell the story of Mara, a powerful deity who promises great treasures—and vengeance to those foolish enough to gaze into its all-seeing eyes. Board a rugged troop transport and enter the Chamber of Destiny. Confront inconceivable dangers, like precarious precipices over molten lava, screaming mummies, swarms of giant insects, spear-throwing wraiths, collapsing bridges, slithering snakes—and a massive rolling boulder.

Let’s take a closer look at some of the coolest things you may have never spotted or known about this beloved attraction.

Related: VIDEO: Virtual Ride of Indiana Jones and the Temple of Peril

‘Raiders’ of the Missing Props

One of the main reasons so many people love the Indiana Jones Adventure is because of the extreme attention-to-detail throughout the entire ride. In the queue alone, there are over 1,300 props that help tell the story of Indy’s latest adventure. Guests with a sharp eye can spot props used from 1981’s Raiders of the Lost Ark, including the screen-used German Patrol Truck that sits at the entrance of the attraction in Adventureland.

Once inside the 0.5 mile-long queue for Temple of the Forbidden Eye, guests are transported to the 1930s. Keep an open eye, and you can find screen-used items from the Indiana Jones films like old magazines, radios, maps, and artifacts.

Have you ever noticed those weird markings on the walls and passageways of the ride’s queue? To keep guests entertained while waiting in line, Imagineering created their own language and hid secret messages in plain sight! During the opening for Temple of the Forbidden Eye, guests were given special decoder cards to crack the codes!

Some of the messages read:

Mara shall guide you through the doorway of your most secret desire in the chamber of destiny.”

One Iook will lead through the tunnel of torment to the gates of doom.”

You can still go up to a Cast Member working in the attraction and ask for a decoder card!

Near the middle of the attraction, while speeding through the hallway of skeletons, look down, and you can spot a skeleton sporting a Mouseketeer cap that read “Bones.” Just be careful about stepping on booby traps!

Not everything has aged perfectly in the Indiana Jones Adventure. Right when you enter the main chamber with Mara’s skull shooting lasers towards the ceiling, a hidden machine would drop large chunks of ice that would “fall” from the cave’s ceiling to create the illusion of falling rubble.

Every 18 seconds, ice would fall from a remote conveyor belt system. Only after a year of the attraction’s operation, the effect was turned off due to either the system continually breaking down or the trap door rusting over due to poor environmental conditions.

To this day, you can still hear the audio of the falling “rubble” right before turning left into the skeleton hallway.

Upon boarding the transport cars, guests are transported through a set of glowing doors into either the Chamber of Earthly Riches, Fountain of Eternal Youth, or Observatory of the Future and must avoid looking into the “eyes of Mara!”

Did you ever notice three doors before entering this hallway, but you only go through the middle one?

Until the end of 2014, the walls and ceilings of the Chamber of Destiny rotated around one working doorway and a set of four facades, so it appeared that there were three “doors” that entered into either of the three chambers at any given time. Each of the doors was specifically lit to appear as different passageways. Once inside the hallway, lighting, projectors, fiber optics, and audio queues created the effect of the transport entering a different room.

By 2015, the machine used to rotate the facades was permanently turned off due to structural damage.

Today, the same special effects create the appearance that guests enter into one of the three separate rooms, though you always enter through the middle door.

Hopefully, one day this effect will come back to life!

Which Indiana Jones Adventure fact was your favorite? Did we leave any fun facts out? Let us know in