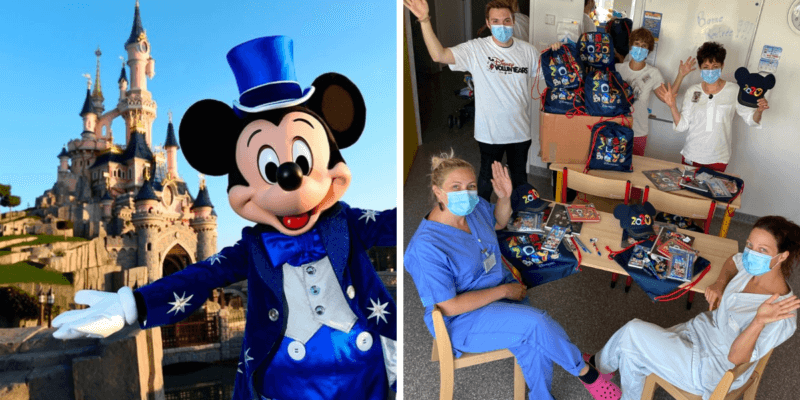 Around 500 boys and girls are about to receive some very special back-to-school Disney Magic as Cast Members and VoluntEARS from Disneyland Paris prepare to distribute scores of pens, books, backpacks, and other supplies that are so necessary in order to achieve academic success.

According to Disneyland Paris’ news site:

With the return to school, Disneyland Paris teams and Disney VoluntEars prepared some 500 school bags with Disneyland Paris notebooks, pens and other school supplies to be distributed to local associations for children including l’Ecole à l’Hopital, le Foyer de l’Enfance, l’Institut Medico-Educatif and le Centre Intercommunal du Val d’Europe.  Disney VoluntEARS were on hand to prepare the bags and had the opportunity to distribute them to the children.

This special surprise for back to school was part of Disneyland Paris’ continued commitment to the local region, in an effort to support associations and bring magic to children in hospitals and in the local community at the start of the school year.

This is only the latest story of Disney’s charitable works in action as 2020 has become the year for the VoluntEARS. In America, Walt Disney World Cast Members and VoluntEARS have been hard at work supporting their communities during these tough times.

When the Walt Disney World Resort closed its gates in March, all excess food from the resort was donated to the Second Harvest Food Bank as part of the Disney Harvest Program. In California, would-be Guests and Disneyland Resort Cast Members alike joined together as VoluntEARS to help those communities.

Earlier this week, we also shared the story of a drive-up food bank operated by the Walt Disney World Cast Member Union Unite Here! Local 737. Donating over $100,000 worth of groceries over the past 16 weeks, these Cast Members have been hard at work feeding hundreds of people laid off or furloughed due to Central Florida’s struggling tourism industry.

These voluntary acts of charity prove once again that there is far more to Disney Magic than the pixie-dusted attractions you find in its theme parks.

Are you excited to see VoluntEARS from Disneyland Paris help prep kids for school? Let us know in the comments below.