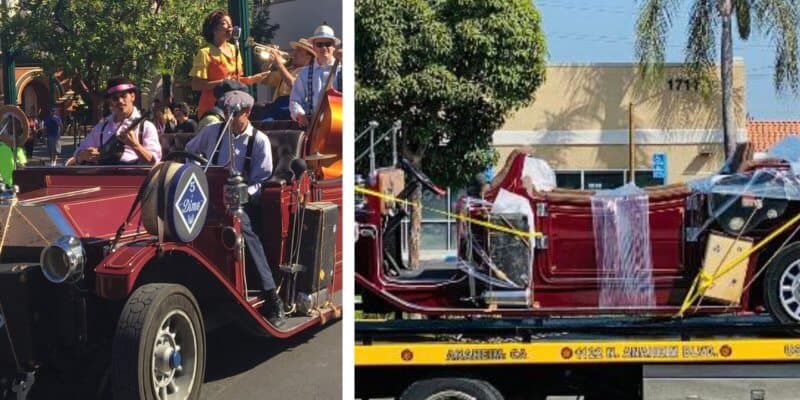 Another day has passed and we are another day closer to the Disneyland Resort reopening. Both Disneyland and Disney California Adventure have been closed for over 6 months now, but things are definitely starting to look like we are ready to reopen.

Just yesterday, Josh D’Amaro, Disney Parks, Experiences, and Products Chairman had a virtual presentation with California State Officials urging them to reopen DLR. Josh said the parks are ready to go, and from an outside perspective, he seems correct. Social distancing signage is up, rides and shows are being tested, the parks have been groomed, and Guests cannot wait to return.

Well, it looks like we have found the next puzzle piece to hint that Disneyland Resort is more-than-ready to “open up the gates,” as Princess Anna would say. On Reddit we found this post:

Sure, this could be someones vintage car or prized possession right? I thought that too until I realized it looks exactly like this car.

This is the Five & Dime car from Disney California Adventure Park and it is identical to the one seen on its way to DLR. Five & Dime is a group of “streetmosphere” performers at DCA. Disney Parks Blog best describes them as:

That innovative sextet of maverick musicologists performing every day down on Buena Vista Street at Disney California Adventure park? This group of working-class buddies hails from “Chi-town” – Chicago – and decided to hit the “Mother Road” – Route 66, that is – in search of their big break, just like that other fella from the midwest, Walt Disney.

The young musicians arrived on Buena Vista Street, playing songs for anyone who would listen. That’s where they met Dime, singing at the Five and Ten and dreaming of being a star, and invited her to join the band. T-Bone, the guitar player, is the leader of the club and quite the ladies’ man. That’s Clyde on trumpet, Zoot on the saxophone and Baby hitting the drums. Finishing out the ensemble is Slam, the “Ace of Bass” himself.

Thanks to their sociable style and zany humor, Five & Dime have made plenty of new friends and are entertaining everyone from youngsters to grandparents. Be sure to catch them next time you’re down on the sunny side of Buena Vista Street. With an act like theirs, it’s bound to be nothing but blue skies from now on!

If this is indeed the Five & Dime car we can take a few things away from this photo. Not only is DCA continuing to get ready to reopen, but we are likely to see performers open with the park. We did not get this at Walt Disney World so the possibility of having a more full fleshed Disney experience is exciting and important during a time where so much of the park has been reduced.

Plus, we are not the only ones who think so. The comments on the thread are full of hopeful Disney fans.

We know the Five & Dime car was being refurbished prior to Disneyland’s closure, so we hope this sighting means it was fixed up and is not ready to rock for the DLR reopening once announced! Maybe we could even see a character cavalcade using this vehicle? We’re excited to find out.

Will you be returning to Disneyland Resort upon reopening?