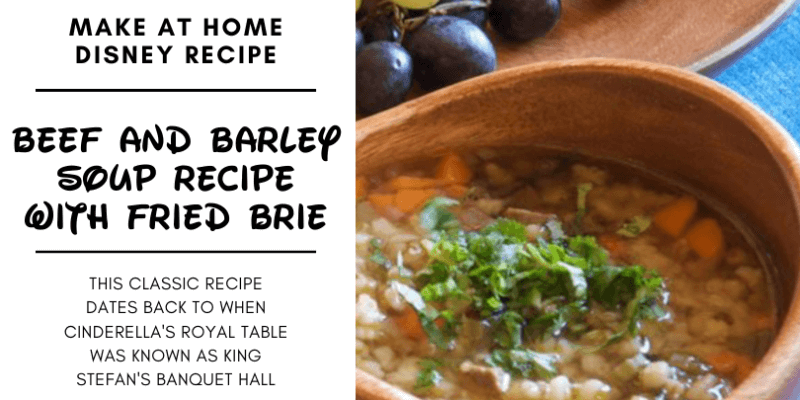 Looking for a hearty recipe to try out as we slowly but surely transition into the fall season? This beef and barley soup recipe was shared by D23 and pays homage to one of the original eateries of the Magic Kingdom in Walt Disney World.

Before the popular dining spot — Cinderella’s Royal Table — took on that name, it had a different one with quite an unusual backstory. Originally coined King Stefan’s Banquet Hall, the restaurant upheld a royal Disney man instead of the popular princess. The dining location kept this name for 25 years. You may be wondering — who’s King Stefan? You aren’t the only ones! This name continuously puzzled guests for the length of its run, before imagineers finally renamed it and renovated the restaurant in 1997.

Back when the restaurant was first being constructed, Imagineers were looking for a regal name to give the establishment, fitting with it’s lush medieval decor and theming. While they said none in the classic film — Cinderella — would fit the bill, they found a match in the royal father of Princess Aurora. Now there’s some fun Disney trivia!

One of the popular dishes at the time of the original theming and menu, was the Beef and Barley Soup with Fried Brie Cheese on the side. Follow the instructions below to make a replica of this long lost, but insanely tasty dish!

*Recipe is shared courtesy of D23 and belongs to Disney!*

Beef and Barley Soup
Bring water and 1 tablespoon salt to a boil in a saucepan on medium-high heat. Add the pearl barley; stir, cover, and reduce heat to low and cook for 30 to 40 minutes or until the barley is tender. Drain well in a colander and rinse using cold water. Set aside. Melt the butter in a large Dutch oven or heavy-bottomed saucepot over medium heat. Sauté onions, carrots, celery, and shallots for 3 to 5 minutes or until tender. Add the roast beef, water, crumbled bouillon cubes, salt to taste, pepper, and garlic, and stir to combine. Bring soup to a boil, then cover and reduce heat to low. Continue cooking for 20 minutes or until the meat is tender. Add parsley flakes and the cooked barley and continue cooking for 10 minutes. Season to taste with coarse salt and freshly ground black pepper. Makes 8 cups.

Fried Brie Cheese
Preheat the oil to 325 degrees in a saucepan over medium-high heat. Using a sharp knife, cut each cheese round into 8 even-sized wedges. Combine the flour and cayenne pepper in a mixing bowl. Place the beaten egg in another mixing bowl and the bread crumbs in a separate mixing bowl. Dredge the cheese pieces in the flour mixture and shake off the excess. Dip the cheese into the egg until evenly coated. Roll the cheese in the bread crumbs, coating evenly. Place pieces of cheese into the preheated oil in batches to avoid overcrowding the saucepan. Cook about 1 minute, or until golden brown. Remove them from the oil and transfer to paper towels to drain. Continue cooking the remainder of the cheese until complete. Heat the tomato sauce in a saucepan over low heat. If needed, season to taste with coarse salt and freshly ground black pepper. Serve the cheese immediately with the tomato dipping sauce on the side.

Will you be trying out this hearty dish?