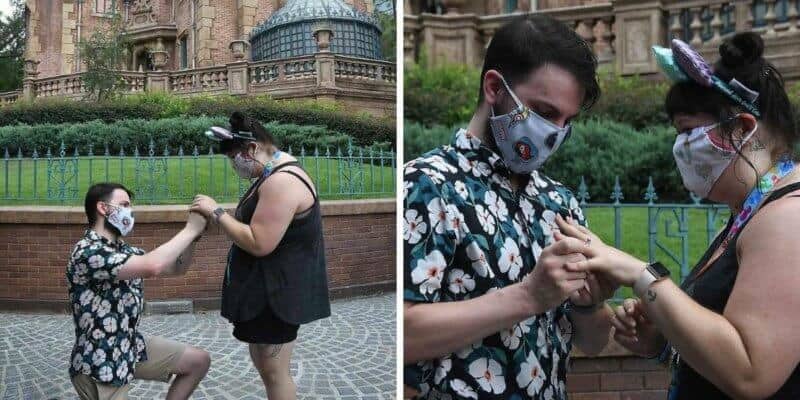 As a huge Haunted Mansion fan myself, and someone who was proposed to in front of the classic attraction last year, when I saw a Disney fan post her magical moment on Reddit, I knew I had to share her amazing story.

Related: Till Death Do Us Part: Planning The Perfect Disney Haunted Mansion Wedding

Ally and her partner, Harrison, recently visited Walt Disney World on a vacation with Harrison’s family. Though Harrison and his family are huge Disney World fans and veterans, Ally never had the opportunity to visit a Disney Park until now.

Inside the Magic had the opportunity to chat with Ally to find out more about this magical moment. Here’s what she had to say:

“We booked this trip in December to go with his family who are also Disney veterans. We have been together for over 4 years. Magic Kingdom was day two of our Disney World trip as we went to Disney Springs the first day. I had been waiting for that moment since I was 4 and as soon as we got it, I was reeling!”

I got proposed to on 8-7-2020 in front of The Haunted Mansion on my first trip to Disney World ????? from WaltDisneyWorld

Ally continued to tell us about her day as they saw several different Disney characters including Mickey and friends as well as the Disney Princesses!

“We saw Mickey and friends when we arrived and I cried haha! Through the day we had a split party of his mom, him, and I and we’re waiting on the rest of his family to join us. We parted ways to go see the princesses on a motorcade on Main Street so his mom could find his brother and dad in the meantime. As a lover of all things spooky and Disney, I had been waiting all day to ride the haunted mansion. They wanted all of us to ride it together because they’re all huge fans of the attraction. So we booked it from Main St, to the Haunted Mansion.”

The funny part is Ally, Harrison, and the rest of the family witnessed a castle proposal on their way to the Haunted Mansion!

“On the way, we passed by the castle just in time for a castle proposal. We shouted and clapped for them while passing and I actually made a joke about how I was slightly jealous of the lovely couple. We laughed and kept making our way to our destination.”

Related: This magical wedding was inspired by Disney’s Haunted Mansion

But little did Ally know, she would be the next Disney World proposal!

“When we got there, his mom had flagged down Photopass Photographer Eric so that we could get our picture taken in front of the haunted mansion before the storm rolled all the way in. (Turns out he was actually leaving for the day and stayed to take our picture. And in order to make it even more special, he called to see if he could do it in from of the actual mansion itself!) I was excited for the group photo commemorating our magical trip!

He pulled Harrison and I aside first (Which I had assumed was just for some fun couple pictures) and made us do some cool shots. He then asked if we had anymore poses we wanted to do. Harrison spoke up and said he could think of one more. Then he got down on one knee and said “I love you and want to spend forever with you, ‘til death do us part?” I was shocked and elated and cried! Of course I said yes!

The crowd cheered and applauded and about 30 seconds later, the lightning began. It was the spookiest best proposal ever and afterwards, we all went on the ride and I fell in love with it. Now it’s going to be the theme of our wedding!”

We wish Ally and Harrison nothing but the best! Congratulations and here’s to a lifetime of happiness!

Did you get engaged at Disney World? We want to hear your story! Let us know in the comments below.