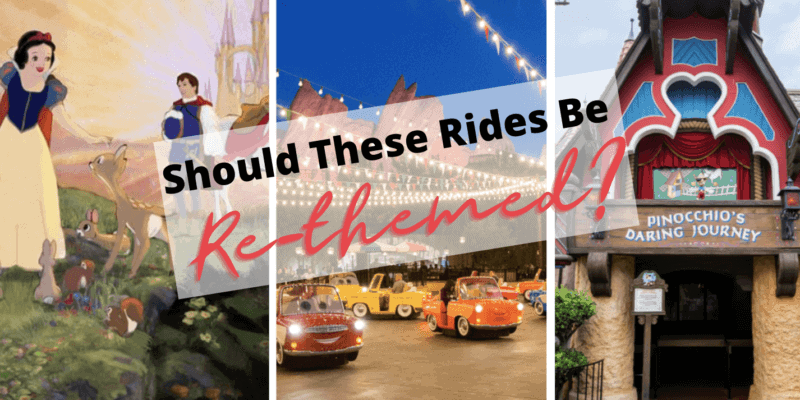 When Walt Disney dreamed-up Disneyland in mid-century America, he knew that the Anaheim, California theme park resort would never truly be finished.

Walt said, “‘Disneyland will never be completed. It will continue to grow as long as there is imagination left in the world.”

This has been evidenced time and time again through the years, first with the addition of now-iconic rides like Splash Mountain and Space Mountain and, most recently, with Disneyland Park’s largest ever single-land expansion, the 14-acre Star Wars: Galaxy’s Edge in 2019.

Since Disneyland Resort remains temporarily closed, there’s no time like the present to look at some small changes Disney could make to older attractions in order to improve the overall Disneyland experience for Guests of all ages.

Snow White’s Scary Adventures closed for a scheduled refurbishment on January 7, 2020. The dark ride was scheduled to reopen on April 7, but that obviously did not happen yet due to the park’s extended temporary closure.

Walt Disney Company officials have not announced whether or not the renovation of the classic attraction has been completed (we’ve seen through aerial images that the construction seems to be ongoing), but the company did release these details about the updates earlier this year:

As a lover of Walt Disney history, I’m glad to see this ride that features Disney’s original Princess getting a much-needed update. The current attraction focuses on the Evil Queen as the Old Hag and can be quite scary for young children.

Ever since Disney announced that the Splash Mountain attractions at both Disneyland and Walt Disney World will be re-themed from Song of the South to The Princess and the Frog, social media has been abuzz with the notion that Pinocchio’s Daring Journey could use a renovation or a complete re-theme.

On Twitter, @ExhaustedBoba pointed out that the ride features a doll that looks like an Asian child being kept in a cage alongside Pinocchio.

The undertones of racism and child enslavement do make Pinocchio’s Daring Journey a prime candidate for a re-theme. Personally, I would love to see the Disneyland attraction rethemed to  feature characters from Zootopia, which isn’t heavily represented in U.S. Disney theme parks at this time.

An AZ Central article that was last updated in 2018 called for the re-theme of Luigi’s Rollickin’ Roadsters in Cars Land at Disney California Adventure park. The writer noted:

Cars dance on a trackless platform. That’s it. Grab your partner, doh-see doh, this here ride has got to go.

I agree completely with this assessment. Luigi’s Rollickin’ Roadsters is one of the least impressive attractions in the entire California Adventure theme park.

Previously, the Luigi’s Rollickin’ Roadsters space was occupied by the short-lived Luigi’s Flying Tires, which opened in 2015. Now, in this writer’s opinion, it’s time to revamp the space again.

One of the most iconic Disney Parks attractions of all time, Jungle Cruise was there on Disneyland opening day in 1955. We recently took a look at whether or not the ride should be re-themed or re-imagined in some way.

According to Dwayne Johnson (The Rock), who will star in the upcoming Jungle Cruise movie, changes are already in the works.

Grateful SOB to have Walt and Mickey watching over my shoulder as @danygarciaco and I embark on this amazing project. For our big #JungleCruise creative meeting at DISNEY's highly secure R&D facilities, me and @danygarciaco were escorted into THE VAULT. A legitimate vault where all of Disney's biggest secrets and plans are kept. Curtains were pulled back for us to reveal the actual drawn up plans that Walt Disney had his brother, Roy Disney take to New York to present to the bankers in 1950 for the potential loan to build what's now known as Disney Land. Cant imagine what that meeting with bankers was like. Roy: Alright gentlemen, so me and my brother Walt, want to build the greatest multiple theme park attraction in the world. Banker: Oh that seems fun, Mr. Disney. Roy: *smiles in a playful mischievous manner, Oh yes my good man, it will have a few things that are in fact, fun. Well, clearly I don't know how the hell men were actually talking in the 50's, but what I do know is being able to star in and produce #JungleCruise is a dream come true. BUT what takes this to the next level, is that we'll partner with Disney's brilliant Imagineers to help re-engineer and re-design the #JungleCruise ride in all the Disney theme parks around the world. A very special opportunity for us and our @sevenbucksprod to create an unforgettable and fun EXPERIENCE for families around the world. And as Walt Disney himself would say… it's magical. Next step is finding our visionary director. Exciting times. #JungleCruise #TheExperience #DisneyStudios #Imagineers #SevenBucksProds #WaltAndRockWouldveBeenBesties #AndWorkoutBuddies #WaltWouldveLovedMyJackedUpPickUpTruck ???

Johnson shared with his followers:

…what takes this to the next level, is that we’ll partner with Disney’s brilliant Imagineers to help re-engineer and re-design the #JungleCruise ride in all the Disney theme parks around the world.

In your opinion, what California Adventure and Disneyland rides are due for re-theming? Share your thoughts about which Disneyland attractions need updates in the comments!

Editor’s Note: The opinions related to the retheming of attractions expressed in this article do not necessarily reflect those of Inside the Magic overall.