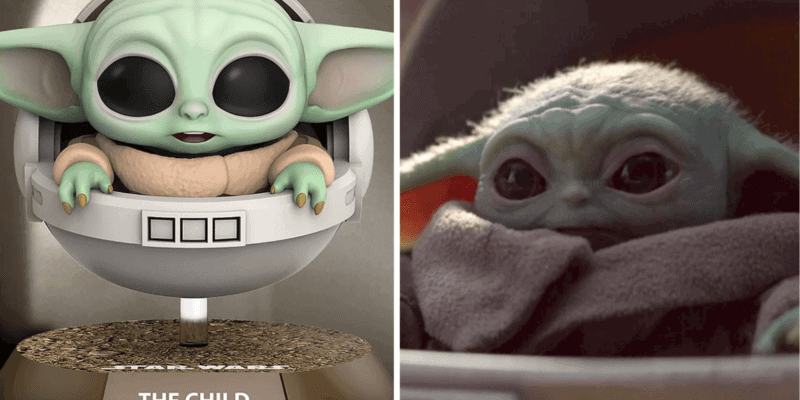 Just when you thought Baby Yoda couldn’t get any cuter, this adorable bobblehead has hit shopDisney! This detailed figure features The Child riding in his hover pod stroller.

Cosbaby collectors will surrender to the charms of this adorable bobble-head figure inspired by Star Wars: The Mandalorian. The Child, with hover pram, is a truly cunning creation as designed by Hot Toys artists.

WARNING: CHOKING HAZARD – Small Parts. Not for children under 3 years.

No detail was left unattended to when this Hot Toys brand Baby Yoda collectible was designed. His hover stroller has all of the requisite scratches and even his fingernails are the right color!

If you’re a Star Wars fan, you need this cute The Mandalorian merchandise before it’s gone. Buy your Baby Yoda bobblehead figure here for $24.99.

What We Know About The Mandalorian Season 2

Creator Jon Favreau has confirmed that the sophomore season of The Mandalorian will debut as scheduled in October. The popular Disney+ series was nominated for 15 Primetime Emmys this year, so fans have high expectations for Season 2.

While the Star Wars fandom hasn’t officially been told much about what will happen to Din Djarin (Pedro Pascal), The Child, and Cara Dune (Gina Carano), we do know numerous new characters will be joining the show.

One likely scenario for Season 2 is that Star Wars: The Clone Wars character Bo-Katan Kryze (Katee Sackhoff) will play into Moff Gideon’s (Giancarlo Esposito) darksaber storyline. Other Clone Wars characters, including Ahsoka Tano (Rosario Dawson) will also cross paths with Baby Yoda and the Mandalorian in the upcoming season.

Are you going to add this Baby Yoda bobblehead to your Mandalorian collection?

Comments Off on Meet the Cutest Version of Baby Yoda Yet – A Bobblehead!