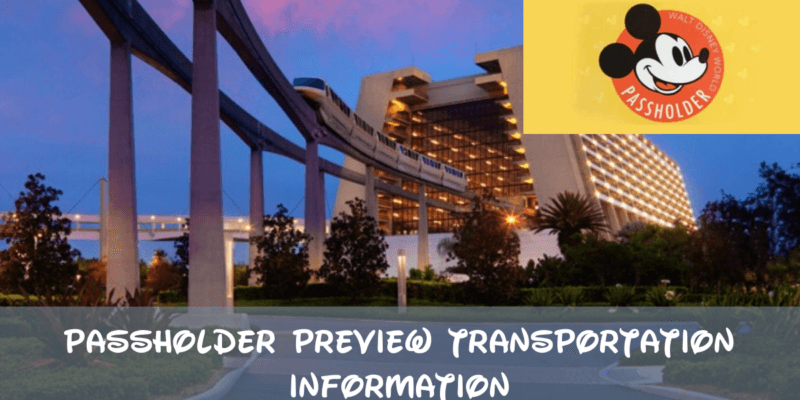 As Walt Disney World resort gets closer to its Annual Passholder preview on July 9 and 10, they have shared some information regarding transportation options at the park.

Along with a lack of transportation from resort area hotels such as Disney’s Contemporary Resort, Disney’s Polynesian Village Resort, and Disney’s Grand Floridian Resort and Spa, and Disney’s Wilderness Lodge, Walt Disney World Guest Services also confirmed that there will be no bus transportation provided from the Magic Kingdom and Disney’s Animal Kingdom to Disney Springs.

Any Annual Passholders looking to visit Disney World’s shopping and dining center after their day the theme park will have to get there via their own means of transportation, such as driving their own vehicle or using a ride share option like Lyft or Uber.

Regarding transportation from the Magic Kingdom parking lot, Inside the Magic received confirmation from Disney World’s V.I.Passholder line that both the Express Monorail and Ferry Boat service will be transporting Guests from the Transportation and Ticket Center to the Magic Kingdom entrance on both preview days. Disney World stated that both Monorail and Ferry Boats are expected to begin operating at 8 a.m. on July 9 and 10, one hour before park opening.

Because the Seven Seas Lagoon sits between the Magic Kingdom parking lot and entrance, Guests are required to use some sort of transportation to enter the theme park. Disney’s Animal Kingdom, on the other hand, can be accessed directly by walking from the parking lot or using the parking lot tram.

As for the Disney Skyliner, that is expected to resume operations on July 15, when the two theme parks it services–EPCOT and Disney’s Hollywood Studios–reopen to Guests. Disney’s Skyliner also services Disney resorts like Disney’s Riviera Resort, Disney’s Caribbean Beach Resort, Disney’s Pop Century Resort and Disney’s Art of Animation Resort.

Are you going back to the Magic Kingdom for Disney World’s Annual Passholder Preview? When you go to Magic Kingdom do you prefer to take the Monorail or Ferry Boat and why? Let us know in the comments!

Comments Off on Transportation Update for WDW AP Preview