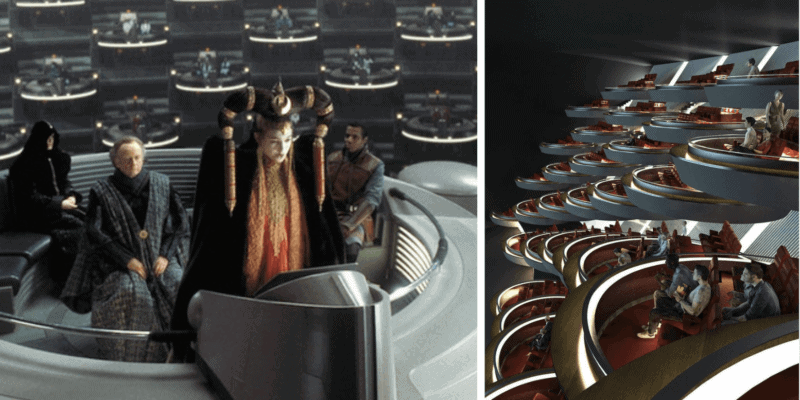 If you’re a Star Wars fan, you might notice something eerily familiar about the concept art for a new movie theater by French company Oma.

Ōma Cinema has designed a new type of movie theater that looks strangely familiar to the Galactic Senate.

Twitter account @DiscussingCinema shared new concept art directly from the Oma Cinemas official website. The goal of this new theater idea is to allow movie fans to still watch upcoming films on the silver screen without worrying about contracting illnesses, such as the coronavirus.

Movie theater chains, including North American giants like AMC and Cinemark, have long tried to outdo one another with new technology and innovative features. From Dolby Digital surround sound systems to IMAX screens to in-seat food and beverage service, theaters have to stay ahead of the pack in a competitive industry.

Oma Cinemas’ new social distancing concept is, however, among the first of its kind. With the notion of physical distancing only entering the popular vernacular this year, the theater chain’s executive team and design staff were undoubtedly working hard to create this futuristic movie theater design.

Oma Cinemas is officially billing their concept as “A new era of movie theater.” Their website concept image even features a Disney film; Tron Legacy is playing on the movie screen.

“Whereas all the cinemas built for more than 50 years now are similar and reproduce the same seating arrangement of the audience, this concept of a movie theatre creates a cinematographic experience at the same time intimate. [It will be] spectacular and immersive, where every seat in the house is the best seat in the house.”

As previously stated, Oma is a French company, but it will be interesting to see if AMC Entertainment, Cinemark movie theaters, or another chain in the United States develops a similar concept for a social distancing movie theater set-up.

Most cinema chains around the world intend to implement social distancing measures when they reopen fully, but it remains to be seen if moviegoers will feel comfortable with this or if they would prefer their local theater owner remodel with a social distancing design.

Would you feel more comfortable going to a socially distanced movie theater? Tell us in the comments!