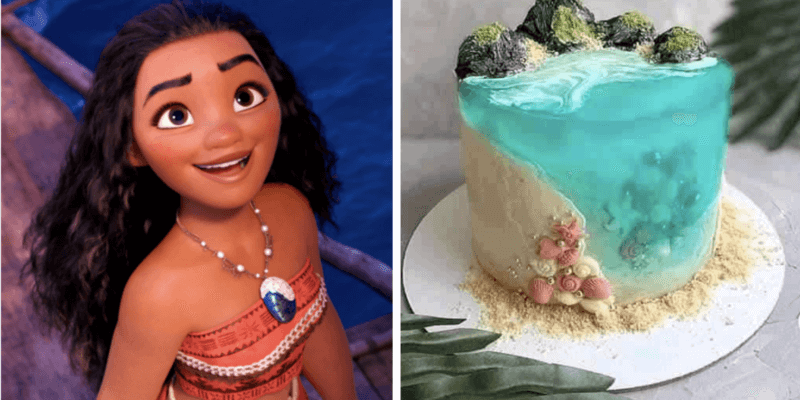 We’ve showcased some pretty incredible Disney desserts in the past, but this new baby Moana ocean design just might take the cake, so to speak. If you’ve been looking for party ideas that feature the Polynesian Disney Princess, look no further.

Shared by Doll Haus on Facebook, this amazing Disney cake features one of Moana’s most famous scenes, in which a toddler Moana plays in the ocean with sea creatures, including the sea turtle she sees again later in the movie!

The front of the cake has a baby Moana figure as a cake topper, traditional fondant icing for water, and what appears to be graham-cracker-crumb sand. The side of the Moana inspired dessert is indisputably adorable, but the back is where the magic really lies!

Edible pearls and other “sea life” can be seen just under the surface of the see-through cake layer.

This beach and ocean Moana-themed cake might just be too pretty to eat! It would be perfect for your family’s next Moana birthday party or even as a wedding shower cake for a Moana-loving bride!

A talented baker could probably even create translucent cupcakes inspired by this awesome Moana cake.

What’s next for Moana?

Even though fans have been calling for a sequel to the popular animated Moana (2016) film featuring the voices of Auli’i Cravalho (Moana) and Dwayne Johnson (Maui), Walt Disney Studios has not confirmed that a Moana 2 sequel is on the way.

The Walt Disney Company has, however, announced that Disney World’s EPCOT theme park will be getting the company’s first Moana attraction, called A Journey of Water, Inspired by Moana.

The walk-through attraction is officially described as:

The attraction currently has a 2021 completion date, but many projects at EPCOT have been pushed back due to the Disney park’s temporary closure earlier this year.

We don’t know if we could bring ourselves to actually eat this gorgeous ocean Moana cake! Would you be willing to “dive into” a slice?