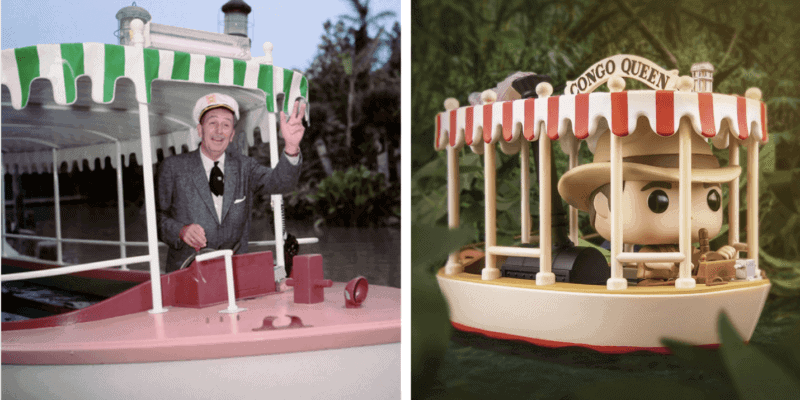 “There it is, ladies and gentlemen, the backside of water!”

If you’re a fan of the popular Disney Parks Jungle Cruise attraction, you’re already smiling after reading that one-liner. The Jungle Cruise Skippers are half the fun of the ride, just like Walt Disney intended.

This ride was at Disneyland on opening day in 1955 and has developed something of a cult fan base. It’s given rise to Cast Member quarantine videos, a Jungle Cruise board game, and an upcoming movie starring Emily Blunt and Dwayne Johnson (AKA The Rock).

Excursions depart daily. Sail past the backside of water, with the new Jungle Cruise Skipper Funko Pop! coming to @shopDisney on 7/11. pic.twitter.com/R3VJU3Oh4y

The new addition to the Disney Parks attraction Funko Pop series was announced yesterday on Funko’s official Twitter page with this caption:

Excursions depart daily. Sail past the backside of water, with the new Jungle Cruise Skipper Funko Pop! coming to @shopDisney on 7/11.

Details about the Disney Park vinyl figure haven’t yet been released, but previous Funko POPs based on Disneyland and Disney World rides have been about 5″ tall and priced at $39.99.

These include the Matterhorn Funko Pop and the Walt Disney World Resort Skyliner Funko Pop, which are both still available at shopDisney.

Jungle Cruise remains one of the most iconic rides in Disney theme parks worldwide. The concept, of course, was Walt Disney’s, but Imagineers Bill Evans and Harper Goff largely brought the attraction to life.

Then, Disney’s “Renaissance Man” Marc Davis, most famous for his contributions to Haunted Mansion and Pirates of the Caribbean, added his personal touch as the ride evolved. Davis dreamed up the “Indian Elephant Bathing Pool” and “Rhinoceros Chasing Explorers up a Pole,” which are both Jungle Cruise icons today.

Are you going to buy the new Jungle Cruise Funko Pop on Saturday? There’s no word yet on if the Jungle Cruise boat figure will be available at Walt Disney World this weekend or if it will be an online exclusive, so we recommend visiting shopDisney.com to have the best chance of getting this Funko for your collection!

Comments Off on Don’t Miss This Jungle Cruise Funko POP Coming This Week!