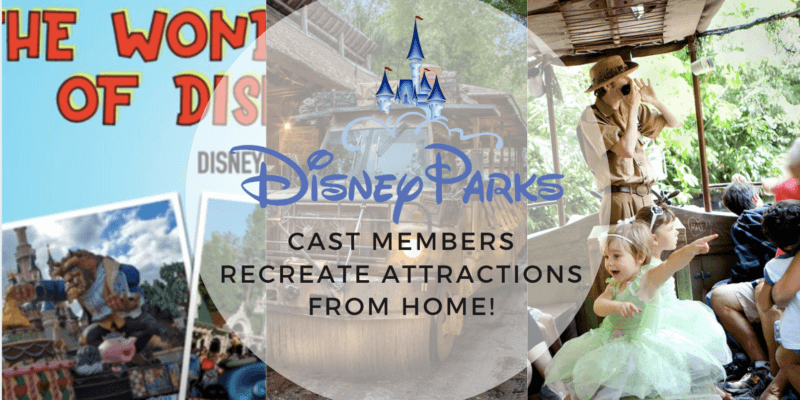 If you love Disney Parks parades and attractions as much as we do, you’re going to be obsessed these recreations from current and former Cast Members around the world.

Those who remember the popular Disneyland Paris ‘Wonderful World of Disney Parade,’ which ran for nearly a decade from 1998 to 2007, will love this lockdown recreation that features video submissions sent from nearly 200 former Cast Members!

Creator and former Cast Member Mat Davies said, “Seeing photos of me dancing in the parade with so many great people, I decided to set up a Facebook group to see if there would be any interest in creating a lockdown version of ‘The Wonderful World of Disney Parade.'”

Davies even started a Facebook group for former Disneyland Paris Cast Members who were involved in the parade. It is now over 1,200 members strong! This virtual Disney reunion has served as an inspirational outlet for everyone involved. One member shared, “This was the group that none of us knew we needed.”

The Kilamanjaro Safari, which allows Walt Disney World Resort Guests to ride through a portion of the Disney Wilderness Preserve, is one of the most popular attractions at Disney’s Animal Kingdom.

Current Cast Member Katelyn, who works as a Kilamanjaro Safari driver, has recreated the famous attraction in her home. The Disney Parks team shared Katelyn’s video, in which she “drives” through the Disney World safari route using her own stuffed animals and Mickey Mouse safari vehicle.

Disney stated, “Jambo, friends!  Every day, we see more and more great stories of cast members and Disney fans creating magical moments at home, and we can’t help but be delighted and inspired by the true creativity in action!”

“One such example is Katelyn, a cast member at Kilimanjaro Safaris in Disney’s Animal Kingdom. Inspired to recreate the attraction at home, she led a one-of-a-kind video safari through the Harambe Wildlife Reserve.”

There are few Disney theme park attractions as iconic as the Jungle Cruise. Nearly as famous for its skippers’ tongue-in-cheek jokes as for the ride itself, Guests return time and time again to enjoy a trek through an isolated jungle river.

The Jungle Cruise ride can be found in four of the six Disney Parks worldwide. Now, U.S.-based Disney Cast Members who work as Jungle Cruise Skippers have recreated their famous spiels from home.

These hilarious videos are sure to have you in stitches.

What do you think about these Disney Cast Members recreating attractions? We love everyone making the best of quarantine during the Disney Parks closure!