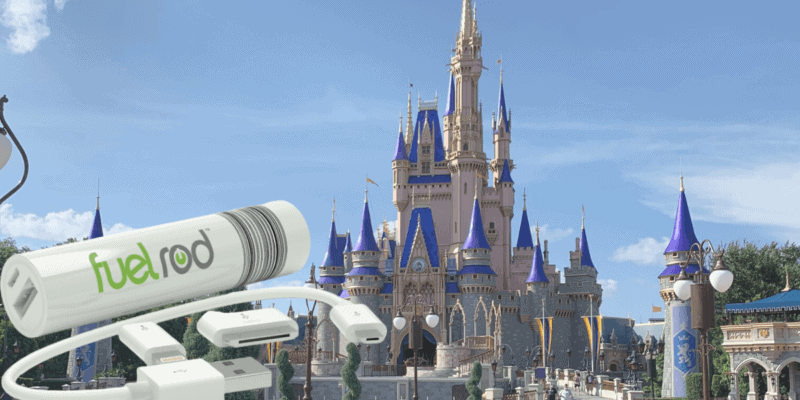 Did you purchase a FuelRod charger at Disneyland or Disney World before October 26, 2019? If so, you now qualify for “Founder” Status and free charger swapping.

Yes, Disney’s portable phone chargers are back in the news, and with it some new policies.

In 2016, Disney decided to capitalize on its Guests’ need to keep their cell phones charged throughout their long days in the theme parks by offering FuelRod portable chargers.

FuelRod describes its product as “the first reusable, portable charging system that allows you to fuel (charge) your mobile device on the go, and then recharge or swap for a fresh one.”

At several locations throughout the Disneyland Resort and the Walt Disney World Resort, Guests were able to buy a FuelRod charger for $30 and then return to those locations to swap out dead rods for charged ones.

This system was advertised as “free, unlimited charging” after the purchase of the $30 starter kit. But in 2019, Disney and FuelRod decided to change that and begin charging $3 per charger swap.

A lawsuit was then filed in San Diego against FuelRod’s parent companies, Tricopian, Inc. and SaveMe Batteries North America, and related parties on the grounds of false and misleading advertising as well as breach of contract. This violated the California Unfair Competition Law and violation of the California Consumer Legal Remedies Act.

FuelRod later stated that the $3 swap fees–which were supposed to go into effect on November 1, 2019–would not be implemented until further notice.

Now, they have come up with the new “Founders” status.

FuelRod stated in a press release:

Tricopian, Inc. (DBA: FuelRod) announces the availability of the “Founders” status in recognition of the continued support and loyalty of the most valued customers and “early adopters” (*) of FuelRod’s world-first, power-on-the-go program. The creation of the “Founders” status also resolves pending litigation against it pertaining to changes in its policies regarding charges for swapping its devices.(**) As a Founder, the customer can continue to enjoy free, unlimited swaps at any FuelRod kiosks (***). There is no cost to eligible customers to become a Founder.

Once verified, Founders will use the FuelRod app in conjunction with the kiosks to obtain free swaps under the program. The app will generate a scannable QR code that will be input at the kiosk at the time of the swap. The kiosk will then allow Founders to swap their existing FuelRods for free, even at kiosks that charge to swap.

This status is for anyone who started using FuelRod before October 26, 2019.

In other words, this will grant select users free charger swapping while anybody who started using FuelRod after October 26 will be subject to an upcharge, like the $3 swap fee the company intended on introducing at Disneyland and Disney World.

Click here to fill out the questionnaire to see if you qualify for the status.

What do you think of FuelRod’s decision? Do you think it’s fair? Do you use FuelRod chargers when you go to the Disney theme parks? Let us know in the comments!