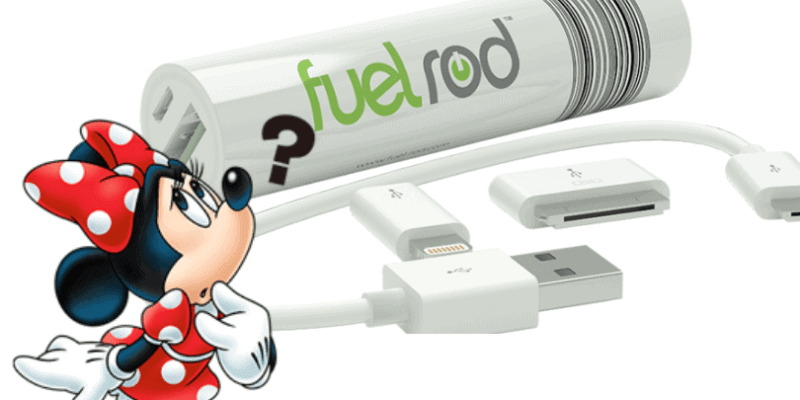 Even though Disney FuelRod portable charger kiosks began displaying signage last week that indicated a $3 charger swapping fee would be implemented beginning November 1, it doesn’t look like the fee is in place today at all. As of this Friday, the kiosks do not display the signage indicating the new fee, and when a FuelRod user follows the on-screen instructions to swap their charger, they are not prompted to insert payment for the swap.

According to OC Register, Disney officials said that FuelRod will not move forward with a plan to implement a $3 portable charger swap fee at the Disneyland and Walt Disney World resorts until further notice, Guests can continue to swap their portable chargers at no additional cost at FuelRod owned and operated kiosks at the Disney Parks.

Some guests at Walt Disney World were reporting that they were having issues at several FuelRod kiosks after 12 p.m. on October 31. They shared that they were unable to swap any of their FuelRods at various different kiosks in the theme parks. However, as of November 1, it seems as though swapping is working and no guests are being charged to swap.

I'm very sorry you've experienced trouble with this. I encourage you to speak with a nearby Cast Member or visit Guest Relations for assistance. -Nina

I apologize again for the trouble with our FuelRod stations. While technical issues can happen from time to time, I assure you your feedback has been shared with the appropriate areas. -Nina

Guest feedback may have impacted another decision made by The Walt Disney Company. We’ve just heard that Disney might be going back on the decision to charge for FuelRod portable charger swapping at Disney Parks.

Previously, FuelRod charging kiosks at Disney Parks began displaying signs warning of a change from free, unlimited portable charger swaps to $3 swaps beginning November 1. But after facing guest backlash and now that a lawsuit against FuelRod’s parent company has surfaced, it looks like Disney might be going back on this decision.

Now, the signage indicating the $3 swapping fee beginning November 1 has been removed from several FuelRod kiosks throughout the Disney Parks. Some are even reporting that Disney has made the decision to no longer implement the charging fee and guests can continue swapping out their used chargers for fully charged ones for no additional cost for the time being. So far nothing has been confirmed and Disney has yet to formally announce this change, but considering the fee was supposed to begin tomorrow and several kiosks no longer show the fee signage, this could be good news for FuelRod users.

This isn’t the first time we’ve heard of Disney fans possibly having a hand the company’s decisions. Earlier this week, we shared how Disney and Sony executives admitted that fans impacted the Disney-Sony deal and contributed in the companies’ decision to reach an agreement on Spider-Man’s involvement in the Marvel Cinematic Universe. And in another case, after guests were outraged by the decision to change the themed names of food items in Star Wars: Galaxy’s Edge, Disney seemed to go back on that decision, too (or at least reach a middle ground).

Keep in mind that nothing is set in stone, and although many speculate that Disney is going back on their decision to start charging every time FuelRods are swapped, there’s also the possibility that new, permanent signage indicating the $3 fee could be installed on the kiosks overnight in time for park opening tomorrow. We will keep you posted, should anything change.

Comments Off on UPDATE: Disney is not implementing FuelRod charger swapping fees