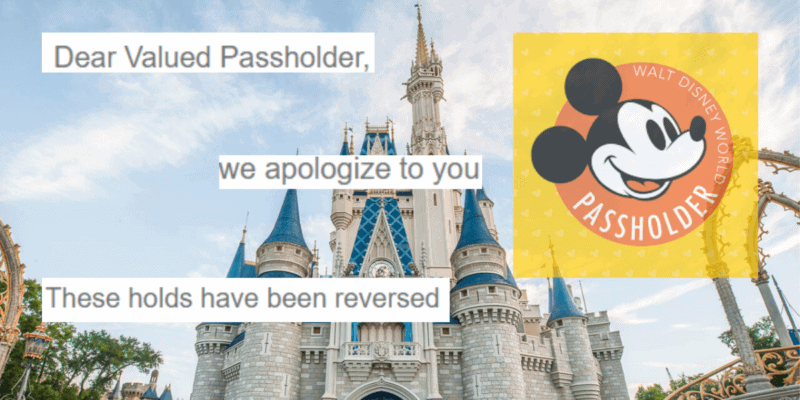 In the email, Disney acknowledges that the charges caused “confusion and frustration,” and the company has apologized to APs for the inconvenience.

You can read the full email below:

We regret that some of our Passholders on the monthly payment program had authorization holds incorrectly applied to their accounts on July 3rd. We realize that this error caused confusion and frustration and we apologize to you for the inconvenience this caused. These holds have been reversed and you should begin to see this reflected in your bank or credit card account over the next couple of days.

We reported on Friday morning that Disney had incorrectly and suddenly pushed through multiple months of payments for Disney World Annual Passholders who are on the monthly payment plan. Several WDW APs took to social media to voice their concerns and frustrations regarding the issues. Many claimed that it was a poor move on Disney’s part to incorrectly charge APs upwards of hundreds of dollars when so many people around the world are currently without work due to the pandemic. Now, Disney has sent the written apology to Passholders, which may help alleviate some of the frustration.

This email sent to WDW APs on the monthly payment plan comes three days after Disney reportedly admitted to the payment error. We shared on Friday that a few hours after APs noticed the excess charges on their bank statements, Disney had reportedly apologized. However, none of the WDW Annual Passholders on the Inside the Magic team had received an email regarding the mishap until this evening. The email also states that within the next couple of days, APs should see the charges to their bank accounts completely reversed.

If you have any questions regarding the Walt Disney World Resort Annual Passholder program, visit the official website or call  V.I.PASSHOLDER Support at (407) 939-7277.