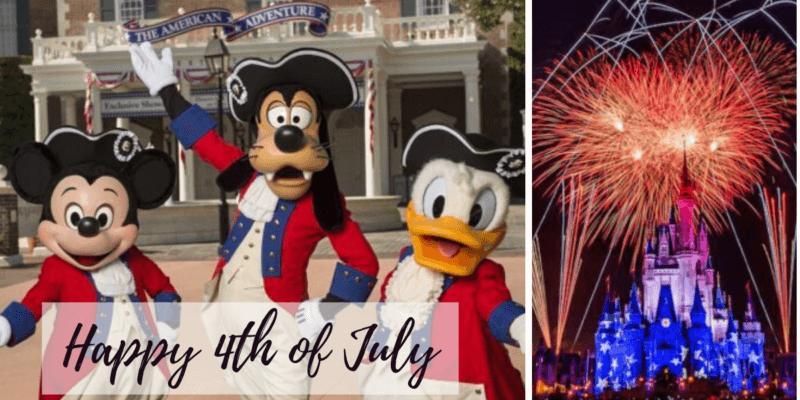 Although we can’t celebrate American’s Independence at a US Disney Park this year, there are still many ways to enjoy a Disney Fourth of July at home. From fireworks to special live performances, there is something for everyone to enjoy. Here are videos of some of our favorite Disney celebrations that will help you get into the Fourth of July mood.

Celebrate America – A Fourth of July Concert in the Sky!

One way Disney fans like to celebrate the 4th of July is by watching fireworks! Disney’s Celebrate America! A Fourth of July Concert in the Sky at Magic Kingdom is an impressive 360 degrees fireworks display accompanied by patriotic tunes.

Great Moments in History with The Muppets

The muppets at Magic Kingdom’s Liberty Square retell America’s history with their own personal touch and special kind of humor. There are two versions of the show. One features the Declaration of Independence and the other features Paul Revere. So, enjoy these great moments in history (but only the American parts)!

The Hall of Presidents is shown all year but does teach American history, so it goes with the Fourth of July theme.

In the past, Walt Disney World added a special July Fourth finale to EPCOT’s Illuminations: Reflections of Earth fireworks show.

They no longer have this show in Epcot, but it is fun to see something the no longer have at the parks. Especially if you have memories of seeing it in the park from when it was around or just another show to watch at home!

If you are used to going to Disneyland, or just want to see how both Disney parks celebrate, Disneyland shows Great Moments with Mr. Linclon.

Great Moments with Mr. Lincoln shows the story of President Abraham Lincoln. Lincoln was Walt Disney’s favorite president, so he made sure to share the story of what Lincoln did. Like Hall of Presidents at Magic Kingdom, it is shown all year long.

In 2018, The 1st Marine Division Band performed the Oscar-winning song “Remember Me” from Pixar’s Coco and the full theme from The Incredibles during the Independence Day celebration at Disneyland.

What is your favorite way to celebrate the Fourth of July when you are at the Disney parks?