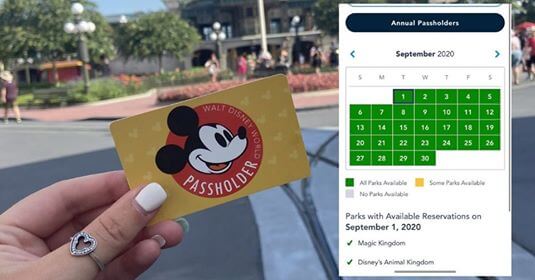 Upon further investigation we found new availability in July and August, but also in September as well. For example, we previously reported the following dates were unavailable for Magic Kingdom for Annual Passholders, but in the screenshot below you can now see every date is currently green (meaning there is availability at every park).

The news of this increased availability broke on July 14 as Walt Disney World released an official statement notifying Passholders that:

We at Inside the Magic had been staying up-to-date on the availability of Disney’s park pass system and had reported that all of July was completely booked up for all parks.

Now, as this article has been written, it appears that the only theme park unavailable for Passholders in the month of July is Disney’s Hollywood Studios. Disney’s Animal Kingdom also shows no availability on July 28.

At the time this article is being written, the entire first half of August is also booked for Disney’s Hollywood Studios. Disney’s Animal Kingdom is booked for August 22.

Remember that the increased availability does not mean an increase in park pass reservations. Disney World Annual Passholders are still restricted to only making three reservations at a time.

If you are still looking to make the most out of your Annual Pass and are looking to book your next trip to Walt Disney World, our friends at Academy Travel are standing by to help. Academy’s agents know what it takes to help you take the biggest possible advantage of your passholder status and organize the most magical trip possible. Click here to learn more and receive your free, no-obligation quote today.