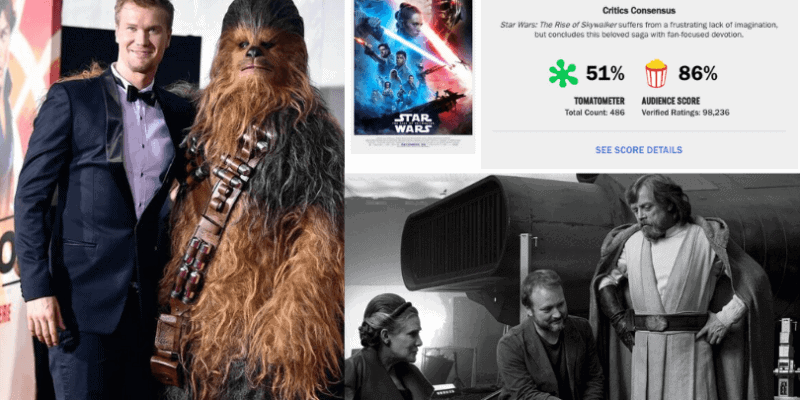 The Star Wars sequel trilogy gets a pretty rough name. From internet trolls to concerned fans, there have been non-stop gripes since the controversial Episode VIII hit theaters and became what many consider to be the most divisive film ever made.

One person who (unsurprisingly) defends the final third of the Skywalker Saga is actor Joonas Suotamo. Let’s find out why the man behind Chewbacca defends Star Wars The Last Jedi and The Rise of Skywalker!

Seeing that The Last Jedi and The Rise of Skywalker were both trending on Twitter, the beloved Chewie actor felt he had to pitch in and defend them.

“I woke up to see that #TheLastJedi and #TheRiseOfSkywalker are both trending. Debating movies is a healthy and natural part of filmmaking, but I loved working on both of these films and collaborating with everyone involved. I might be biased though. Rawrrgh!”

I woke up to see that #TheLastJedi and #TheRiseOfSkywalker are both trending.

Debating movies is a healthy and natural part of filmmaking, but I loved working on both of these films and collaborating with everyone involved.

Are the Star Wars sequels good or bad?

Debate continues between fans who love and loathe the Disney Star Wars fans and it follows the rumor that the Star Wars sequel trilogy will be reset and erased from canon. While most will agree that Rian Johnson’s The Last Jedi isn’t a patch on Lucas‘ work – especially the seminal Empire Strikes Back – there is still much to enjoy in the film, especially the performance from actor Mark Hamill.

The Rise of Skywalker, however … well … is pretty universally considered a mess. Most fans have voiced their opinions that though it features a great hero in Rey, the triumphant return of both Lando Calrissian and a brief cameo from Harrison Ford’s Han Solo, it feels way too much like damage control to ‘fix’ the complaints of the Last Jedi. Chancellor Palpatine‘s return as the evil Emperor takes the Star Wars films way over to the dark side of desperate fan service and nothing in the movie feels earned or organic.

Oh well, at least this Star Wars fan fixed the final battle by having Rey be surrounded by the past Jedi‘s ghosts, instead of just their hearing their voices while wielding Anakin’s lightsaber.

Star Wars fans will know that the role of Han Solo‘s Wookiee co-pilot was originally portrayed by actor Peter Mayhew. Mayhew portrayed Chewie in the original ‘Star Wars‘ trilogy as well as 2005’s Revenge of the Sith. Chewbacca did not appear in 1999’s The Phantom Menace or 2002’s Attack of the Clones.

Peter Mayhew even played Chewie in 2015’s The Force Awakens, though this time he shared the role with Suotamo. Mayhew finally retired from the role with 2017’s The Last Jedi, though he did stay on as ‘Chewbacca consultant’ (otherwise known as the best job title of all time).

All in all, Mayhew played the world’s most famous Wookiee in five out of the nine Skywalker Saga movies, with Suotamo taking the role in the final two as well as Disney‘s Solo: A Star Wars Story.

Mayhew sadly passed away in 2019, weeks before his 75th birthday. Star Wars Episode IX: The Rise of Skywalker is dedicated to his memory.

What do you think of Joonas Suotamo’s comments? Is he right about Star Wars: The Last Jedi and the Rise of Skywalker? Let us know in the comments below.