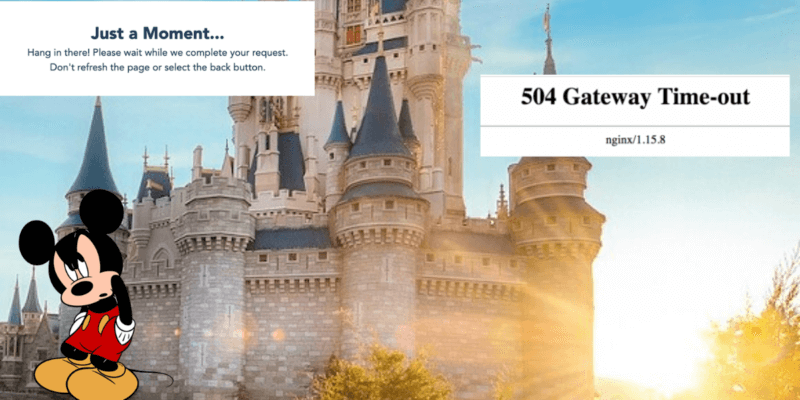 It was finally open… and then it wasn’t? As Guests rushed onto the Walt Disney World Website, it appears that its park reservation system had crashed mere minutes after opening.

We have continued to follow the Disney Park Pass theme park reservation system on its launch day, and we have updated this article with the most recent information pertaining to Guests’ experiences.

After waiting for several minutes, Guests then reported being hit with a 504 error screen. They were then returned to the Pink Castle waiting page.

A few Guests were reporting making it past the castle waiting page, but no park reservation options were provided. One Guest even reported getting kicked out afterward.

I'm literally getting this now…. with no options either 🙁 pic.twitter.com/vDSbCGa0df

As future Walt Disney World Guests neared their second hour of trying to claim their theme park reservations, we ITM have witnessed some progress in the system. Passed the pink castle and the 504 error messages, our reporter now has a wait time.

A new screen popped up of Space Mountain saying “We’re almost in orbit. We need a moment to complete your request. Don’t refresh the page or select the back button!” And a wait time of eight minutes and sixteen seconds was given.

However, it was also reported that this wait time was updating to longer and shorter periods.

At least, one of the reservations.

After securing reservations for a trip in mid-July, our reporter went to secure reservations for a second trip in December. However, he reported that the system would not let him secure more than eight-days-worth of park reservations at a time, and he had already secured eight for his July trip.

There is still no word from Disney regarding the issues with the Walt Disney World park reservation system.

Inside the Magic has previously reported that Guests are being asked to make reservations for one park per day. Park Hopping options are currently suspended. In the lead up to the opening of the Park Reservation system, Walt Disney World told its would-be Guests to link their reservations and valid park tickets to their My Disney Experience accounts, and the entire party must be linked to the account of whoever has been tasked with making the reservations for everyone. Both valid park reservation and theme park ticket will be required when you arrive on-property.

Don’t want to be stuck navigating this park reservation system by yourself? Want some expert help? Well, our friends at Academy Travel are standing by help. Whether you are an Annual Passholder or you are visiting the Magic Kingdom for the first time, Academy Travel agents understand these changes and will make sure your trip to the Walt Disney World Resort is Magical. Click here to learn more and receive your free, no-obligation quote today!

Have you been experiencing issues with Walt Disney World’s theme park reservation system? Did you get your reservations? Let us know in the comments!