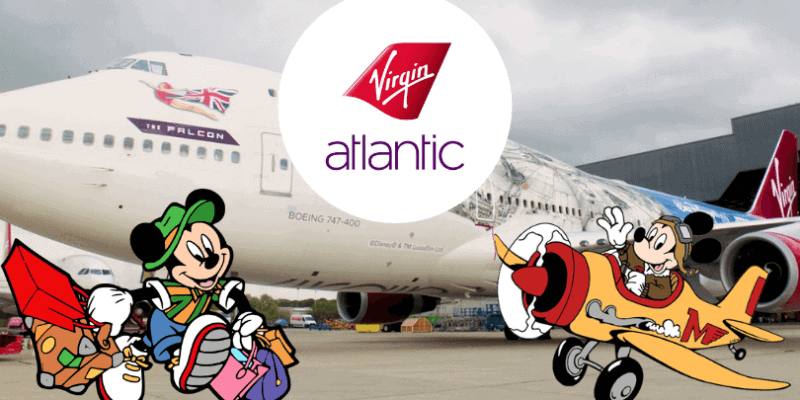 UK Disney fans, rejoice. Virgin Atlantic is taking to the skies once more from July 20th. Though don’t rejoice too hard, as there are still a fair few obstacles in the way of your Disney park vacation.

We recently wrote a piece pondering how the pandemic’s impact on Virgin Atlantic and in particular, its rejection of Gatwick Airport would affect theme park fans looking to get to Orlando or California from London.

Well, while Virgin Atlantic still seems intent on shifting flights from Gatwick to Heathrow airport, routes do seem to be opening up to many Disney theme park destinations.

Check out the tweet from Virgin Atlantic below outlining the details on booking a flight to Los Angeles, Orlando, Shanghai, or Hong Kong.

We’re taking to the skies again. We’ll be flying from @HeathrowAirport to Orlando, New York, Los Angeles, Hong Kong and Shanghai from the 20th July. And with our brand new health and safety measures in place, you can be sure you can fly safe, and fly well: https://t.co/BCk1jCKFcq pic.twitter.com/2bqqBtUD7h

What Virgin Atlantic hasn’t told you about booking a holiday

Don’t get your Mickey Mouse ears on just yet though theme park fans. Despite this being a positive step forward, your Florida holiday isn’t set in stone just yet.

As one perceptive Twitter user asked; what about getting a travel visa? Virgin Atlantic seems to have wished nobody asked, as their advice confirms that in the current situation, most of us are still going nowhere.

How is this going to work if UK citizens are currently prohibited from flying to USA?

Disney vacations with Virgin Atlantic come with one big hiccup

Assuming that travel to the US is allowed, consider one more big thing before booking your Virgin voyage with the airline; quarantine.

As of yesterday, most UK residents will have to self-isolate for 14 days after travel outside of the common travel area and can incur a hefty fine for failing to do so.

So before booking your Virgin holiday to Orlando, Los Angeles, or Hong Kong, make sure that you carefully read up on all the latest government guidance. As a UK resident, I’m itching to get back to my favorite Disney park for a summer holiday, but we have to go at the pace of the rest of the world.

But at least for now, Virgin Atlantic taking to the skies in July looks like a step in the right direction.

Are you a UK resident? Will you be traveling with Virgin Atlantic on a Disney theme park holiday when you can? Let us know in the comments below.