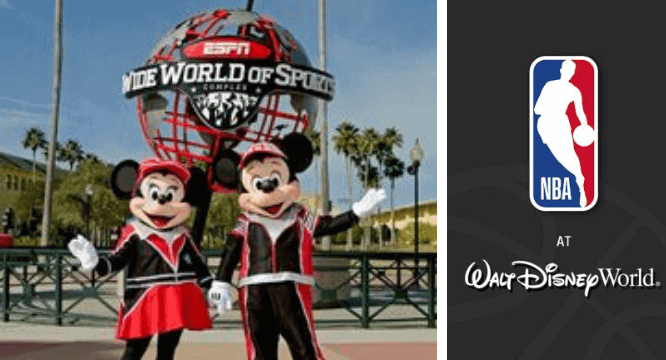 This morning, during a mandatory first wave of coronavirus testing, 5.3% of NBA players tested positive. With a wider lens, that’s 16 coronavirus cases out of a pool of 302 players that were tested (Friday, June 26th). The NBA Commissioner Adam Silver, reports ESPN, said “none of the sixteen NBA players were seriously ill.” Further testing will take place as the July 30th restart occurs on the EPSN Disney campus.

“One thing we’re learning with this virus is, so much is unpredictable,” Silver said during Friday’s conference call with National Basketball Players Association executive director Michele Roberts. “We’re not saying full steam ahead no matter what happens. We all talk daily, and we’re gonna see how this continues to play out. But we feel very comfortable right now with where we are.”

NBA Commissioner Adam Silver and NBPA executive director Michele Roberts both said they were relieved that the number of players confirmed wasn’t higher and that positive tests are expected during this period of mandatory tests. The policy when NBA Players test positive is that the player remains in self-isolation until public health protocols are satisfied and the player has been cleared by team physicians. NBA Players will also be wearing MagicBands to check in to on-property health screenings.

Though insiders had confirmed that discussions were taking place to bring the NBA to the Most Magical Place on Earth, Disney had not yet made an official announcement on the matter until today.

As far as how this will affect your Disney World vacation, you should note that there might not be much to worry about. Although Disney makes no mention of where NBA players will be staying while they are on Disney property, it was confirmed that they will be staying onsite at Disney owned and operated hotels. More on that here.

The sixteen NBA players with a positive test result remain unnamed, however, certain players like Malcolm Brogdon of the Indiana Pacers team has publicly acknowledged they recently tested positive and shared a message on Twitter.

There has been no announcement concerning the testing of staff members, travel parties, or other personnel within the NBA’s upcoming season return. ESPN shares that teams began testing players participating in the voluntary workouts in their home cities every other day. Starting on July 7th, just days before Walt Disney World Resort is set to reopen, teams will begin to arrive. Official training camp will run from July 9th to July 29th for the official July 30th restart, with each team slated for 3 scrimmages apiece.

Do you expect to see more positive cases among the NBA players as the season restart draws closer?  Leave us a comment below!