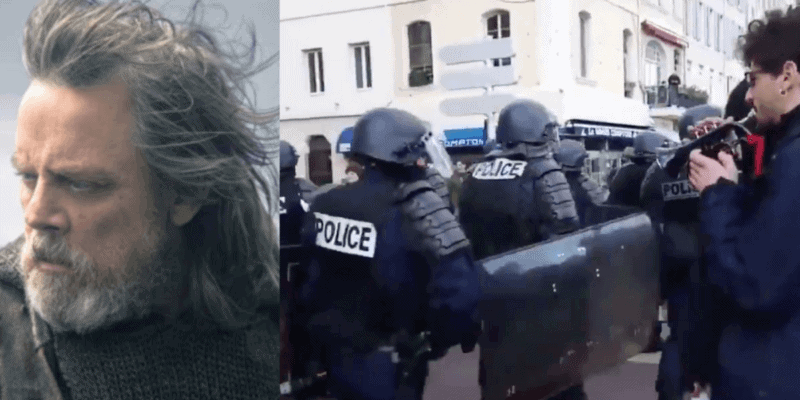 The statement Black Lives Matter may take us into a new world, as millions have taken an affirmative stand against racism, police brutality, and the notion that Black lives matter less than others.

We’ve seen cities around the world take to protest in support of the Black Lives Matter movement that rocketed into the public eye after a Minneapolis Police Officer murdered an unarmed black man.

One vocal supporter of the movement on Twitter has been none other than Luke Skywalker himself; Mark Hamill. We’ve already reported that Hamill vocally gave his support to Star Wars co-star John Boyega who was made an impassioned speech during a protest in central London.

On Twitter, however, in addition to consistently promoting racial equality, Hamill also shared something from one of the protests that was a little lighter.

This dude trolling the police with Star Wars – Imperial March is exactly the Twitter content I am here for today…pic.twitter.com/zh5R7zm70c

Star Wars fans around the globe will instantly know what the tweet means, as the music is synonymous with the Galactic Empire and Darth Vader. Mark Hamill certainly got the joke, here’s his tweet in response;

As well as supporting his fellow Star Wars actor by sharing his powerful speech, Hamill has been one of many Hollywood heavyweights to show continued support for the Black Lives Matter movement.

You better believe the children are our future… & our future is F-I-E-R-C-E! ?#JusticeForGeorgeFloyd https://t.co/TYWKHvPI4L

What do you think of Mark Hamill’s response to this Black Lives Matter protest video? Let us know in the comments below.