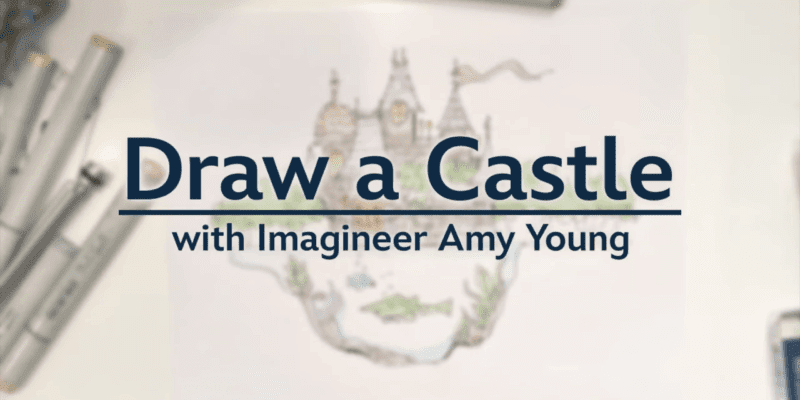 Disney Parks around the world are known for their castles. But like everything else in the parks, they started as drawings on the desks at Walt Disney Imagineering. And one Imagineer wants to show you how to do it.

As part of its #DisneyMagicMoments Campaign, Disney Parks shared a tutorial video that gives fans and artists a one-on-one lesson with Disney Imagineer Amy Young and the chance to learn how to bring their own Disney Castles to life on paper.

Have you tried any of the drawing tutorials on the Disney Parks Blog? Today, we’re excited to share one hosted by Disney Imagineer Amy Young, showing you how to draw a Disney Castle!

Walt Disney Imagineering has many talented artists who dream up big ideas, and given Imagineering’s storied history of designing Disney castles, there’s no better icon to learn to draw from an Imagineer!

As you start the drawing process, feel free to combine some of the elements in this video with your own imagination to draw your own vision for the castle. Or stick with the steps Amy shows you. Either way, we hope you’ll channel your inner Imagineer and enjoy this step-by-step tutorial that will be fun for the whole family.

The video itself is 45 minutes long and rather than drawing one of the castles already in the parks, you will be drawing an original castle.

This is the latest drawing tutorial Disney has featured in its #DisneyMagicMoments segment. Fans have been given lessons on how to draw characters from Olaf and Sven to Stitch, Ariel, and even Spider-Man and BB-8!

Click the links below to choose your Disney Art Class.

Draw with Disney Animation: Learn to Sketch Frozen’s Olaf With an Animator!

#DisneyMagicMoments continues to be a way in which Disney fans are able to get a taste of the magic while they wait patiently for the day they can once again return to the theme parks and resorts.

Have you been doing these drawing tutorials? How do your drawings come out? Let us know in the comments!

Comments Off on How to Draw a Disney Castle