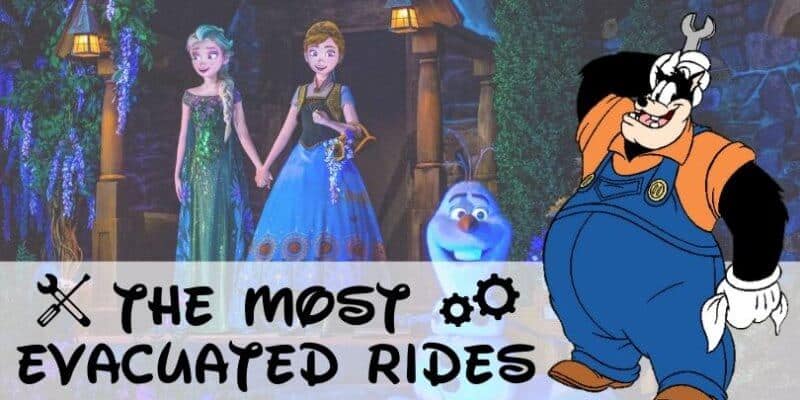 When you decide to plan a Disney trip you have to prepare several things for it. Plan where you will stay, organize your itinerary, pack bags, probably plane tickets, etc. But it doesn’t really matter how organized you are, or how much you plan out your family’s Disney vacation, things may not always go as planned.

Imagine you and your family are waiting in line for a ride and all of a sudden the line stops moving, the intercoms go on, and a cast member announces that the ride has been stopped. Sometimes the ride even has to be evacuated. We understand that it can be frustrating, but we also know technology doesn’t always work in our favor and it can sometimes be a very common happening at Disney World.

However, there are some Walt Disney World rides that tend to breakdown, or stop, more often than others.

According to data from the Reedy Creek Fire Department, and analyzed by the Orlando Sentinel, the top 10 most evacuated rides (in order) are:

The data was collected from a period of two years between July 27th, 2016 through July 18th, 2018, explaining why newer rides are not included on the report.

The report shows that out of over 550 ride evacuation calls, 113 were from Frozen Ever After, 72 were from Pirates of the Caribbean and 64 from Space Mountain. Despite all of the evacuations, the report stated that no one was injured.

According to an email given to the Orlando Sentinel by a Disney spokeswoman, there are many reason why evacuations at Disney rides can happen, from passengers needing more time to exit a ride, a shutdown sensor tripping from a big slash of water or because of a dropped water bottle in the ride’s path.

Related: It’s a Small World After All: Take a Virtual Ride Through Disney Parks Around the World!

Other reasons can be caused by slight Disney ride malfunctions. If you think about it, two out of the three top rides — Pirates of the Caribbean and Space Mountain — have been open since the 1970s. Despite of the age of the ride — that at Disney are extremely well maintained — are very complex and full of safety mechanics. For example, if there is a small issue like a broken sensor could shutdown the ride.

Other reason might be the use of water in the rides. Half of the top ten most evacuated rides are water featured rides. This may be do to the higher degree of difficulty to maintain water ride than regular rides.

Have you ever had to evacuate a Disney ride due to some issue? Let us know down in the comments below?