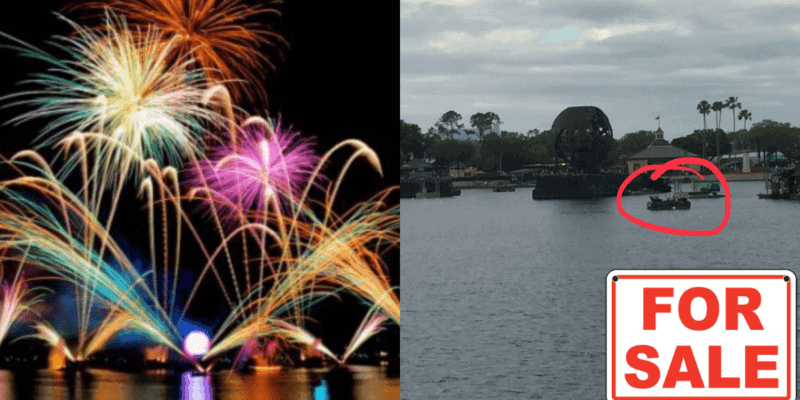 It was not too long ago when people from around the world gathered around the World Showcase Lagoon to share a light and to share a story. EPCOT’s dazzling fireworks spectacular, IllumiNations: Reflections of Earth, was one of the longest-running and most-beloved fireworks shows at the Walt Disney World Resort. And it was also a technological marvel.

The show incorporated the autonomous barges to be set out into the middle of the lagoon and work in perfect sync with the music and each other.

Now, fans of the show have a chance to own one of those barges.

The news was shared over Twitter by user @Traincrossin who wrote, “Want to own a piece of Illuminations history? The midi barges which launched the perimeter pyro are up for auction.” He even includes a picture of the barge in position before the show.

Want to own a piece of Illuminations history? The midi barges which launched the perimeter pyro are up for auction. https://t.co/2maIv6Jz2q pic.twitter.com/lCLziizlX1

The 12ft x 12ft pontoon-style barge is going to be sold today, June 4, during a timed auction. Click here to register to place your bid for this unique piece of Disneyana.

IllumiNations served as EPCOT’s “goodnight kiss” for nearly 20 years. It told a global story, expressing natural beauty and praising human development and innovation. Fireworks launched from those barges danced with a heart-filling score, and because the show took place over a body of water, the fireworks could be launched closer to ground level than any other Disney fireworks show.

It ended with a heart-warming song that encapsulated the human spirit and was a timeless call to action:

We go on to discover new frontiers.

We move on with the current of the years.

We go on, moving forward now as one.

We move on with a spirit born to run.

Ever on, with each rising sun, to a new day, we go on.

IllumiNations: Reflections of Earth ended its tenure at EPCOT in 2019. It has been replaced by a temporary show called EPCOT Forever before introducing IllumiNation’s true successor: HarmonioUS.

New shows often require new equipment, which means Disney fans can sometimes get the chance to own something truly special.

Are you going to bid for this piece? Do you miss IllumiNations? Let us know in the comments!