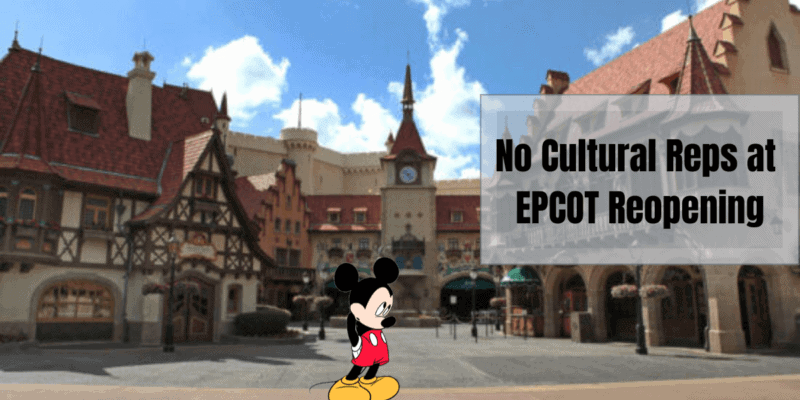 When EPCOT reopens at the Walt Disney World on July 15, World Showcase will likely feel strikingly different. There will be no cultural representatives on hand to welcome Guests back. According to a WDW union, the World Showcase will be “fully staffed by domestic attraction workers.”

The news comes to us from Orlando’s local Fox station which reported, “When Walt Disney World reopens in July, there will no longer be cultural representatives in the countries throughout Epcot’s World Showcase,” as many of the international employees were furloughed and went back to their home countries because of the pandemic. “Disney has reached an agreement with its union to reopen without them for the time being,” Fox reported.

This news was backed by Walt Disney World’s Cast Member Union during a call explaining how and when they will be recalled and return to work. The union representative explained that along with the absence of Disney College Program Cast Members, the International Programs will also be absent. He pointed to the France, Norway, and Mexico pavilions as examples.

Cultural Representatives are the gems of EPCOT’s World Showcase. Adding another layer of authentic immersion, these people give Guests the chance to interact with people from all of the world and learn first-hand about their lives and cultures. Those international programs are also a way for young people from all over the world to have the chance to come work in the United States. It is safe to say that Disney’s permanent world’s fair will not be the same until those representatives return.

Although this union representative only mentioned that World Showcase attractions will be staffed by domestic Cast Members, the Fox report also confirms that the World Showcase will not be staffed by cultural representatives at all. As we wait to hear from Disney regarding when the International Programs will resume, we are hopeful that once international Cast Members are able to come back to work at Walt Disney World Resort, they will do so.