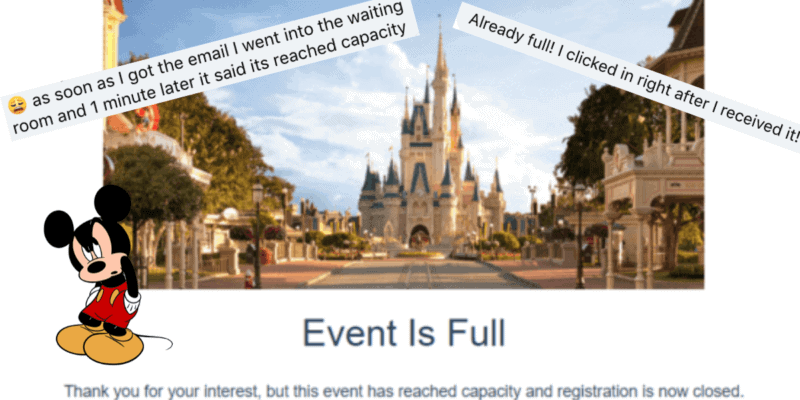 Walt Disney World launched its Annual Passholder preview signup today, and it was fully booked in less than an hour.  Many Annual Passholders are now left furious about how the launch and notifications were handled.

Instead of first receiving an invitation from Disney via email or the My Disney Experience app, Annual Passholders hear the news from third-party reporters or in Tweets or Instagram stories, and they began attempting to claim their spot far earlier than they would have if they waited for that invitation. Many of those who waited to receive their invite from Disney World checked in to find both preview dates (July 9 and 10) already fully booked.

Here’s what some Annual Passholders are saying:

Total BS! Never got an email but instead got a text from a friend and sat in the waiting room for over 20 mins and then just reloaded and says event reached capacity! WTF! The magic is slowly slipping away when you don’t even get and email or text and then have to find out from someone else and sit and wait patiently only to get nothing.

Already full! I clicked in right after I received it!

Family of 5…we never received the email and have been pass holders and DVC for years. Disappointing.

Got the email – immediately clicked in – and full. Really Disney??? And the phone lines are jammed for both DVC and the Refund Center.

This complication also hit Inside the Magic personally as this writer secured his preview spot several minutes before receiving an invite from the My Disney Experience app and, in fact, never received an email notification that previews were indeed open.

Walt Disney World’s Annual Passholder Preview is set to take place at the Magic Kingdom and Disney’s Animal Kingdom on Thursday, July 9, and Friday, July 10. Annual Passholders were allowed to choose only one preview day and will be limited to one park for the day.

For those Annual Passholders who were unable to secure a preview reservation, you can still make park pass reservations for your favorite parks up to three passes at a time. Click here to see which parks are available on which days.

Were you able to secure an invitation to one of Walt Disney World’s Annual Passholder Preview days? Let us know in the comments!