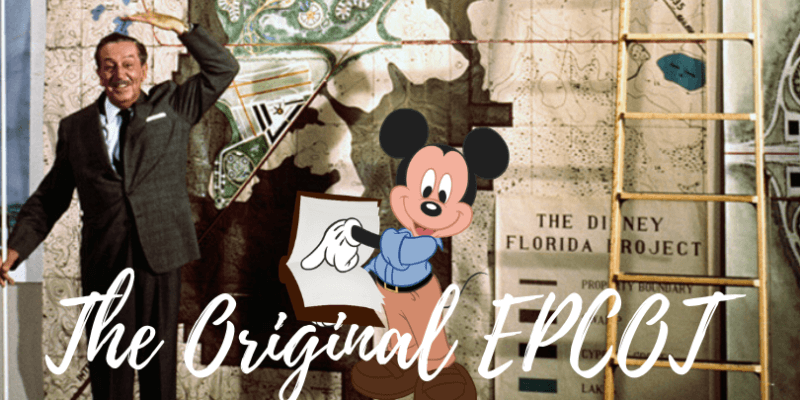 Long before the Magic Kingdom, when Disneyland was the only Disney theme park in the world, Mr. Walt Disney had a vision.

And it wasn’t the creation of a second Disney park.

Disney fanatics might be able to tell you what the namesake of the EPCOT theme park at Walt Disney World stands for, but only hardcore Disney fans will be aware of exactly what the original EPCOT concept was.

E.P.C.O.T (as it was originally stylized) was originally envisioned by Mr. Disney as something far more than a theme park. He was now in the business of building a city, an urban center, and the most forward-thinking attraction the world has ever seen.

(And eventually, of course, an amusement park as well).

The man often considered to be America’s greatest entrepreneur actually wanted to create a circular city on the huge patch of Florida land we now know as Walt Disney World.

What was the original EPCOT city?

Walt Disney‘s ‘Master Plan’ was to create a city that acted as a hub for the future. Brands would be invited to test and exhibit new technology, while the 20,000 citizens of EPCOT would all work and live within one of the city‘s three rings. Nobody would be unemployed and nobody would own their own property.

Walt’s vision was a crime-free progress city that was a celebration of the future. It was essentially a real-life Tomorrowland!

Much like the famous tunnels underneath Walt Disney World, Disney‘s EPCOT would utilize underground tunnels to remove the need for cars in the city.

But how would people get around this super city? Well, .

This along with many a monorail would run through the city and lead all the way from the airport of tomorrow to the Magic Kingdom theme park, where guests would enjoy the magic of Disney but not before cleverly being forced to go through the city first.

Walt Disney‘s EPCOT would’ve been a tourism dream (something that the Walt Disney World resort would become too), with a huge hotel right in the center that would’ve been able to be seen for miles.

If you’re interested in this fascinating bit of Disney history, take a look at this video of Mr. Disney himself, where he explains how the original EPCOT city would’ve worked:

After Disney‘s death just two months after the creation of the pitch video, the Walt Disney Company’s board of directors decided that the city was far too ambitious and that a theme park dubbed the Magic Kingdom would be a much safer bet. Of course, the EPCOT park we all know and love soon followed, but the original EPCOT city remains a fascinating piece of Disney history.

Many elements of the original EPCOT concept were eventually worked into the EPCOT theme park that we all know in love. For example, the dining areas of E.P.C.O.T were planned to be inclusive of a number of different cultures. We of course ended up seeing something similar with the World Showcase, home to a variety of different culture’s music, food, and art, including my two favorites; the China Pavilion and the France Pavilion.

Most of this information was sourced from The Original E.P.C.O.T, an amazing collection of information all about Disney‘s original vision for the E.P.C.O.T city. We strongly recommend you check them out, as Disney fans will find endless hours of fascinating facts all about Walt Disney, the original EPCOT, and what could’ve been the biggest overhaul Disney‘s brand had ever seen.

Walt saw EPCOT as a blueprint for the future. Though his vision was sadly never realized, we like to think he’d be proud of the progress made by the Walt Disney Company. It may not have built a city that continued to pioneer new technology, but it certainly has continued to reinvent the theme park industry, and we hope it always will.

Our question to you is; would Walt Disney‘s vision for the original EPCOT have worked? Let us know in the comments below.