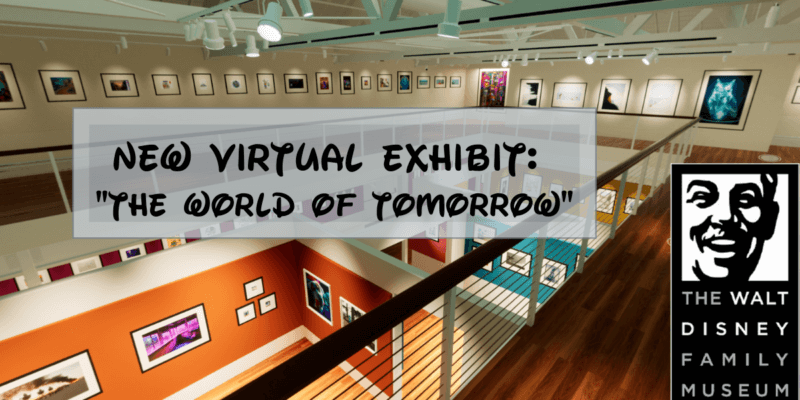 “Today we are the shapers of the world of tomorrow.” — Walt Disney

The Walt Disney Family Museum has unveiled a brand new exhibit called “The World of Tomorrow.” It is a virtual exhibit that features artists in all over the world which you can enjoy at home for free.

According to the museum’s press release:

The Walt Disney Family Museum is excited to premiere The World of Tomorrow, a new virtual exhibition featuring works created by the museum’s global community. Inspired by each artists’ vision for a “world of tomorrow,” this diverse selection of works includes paintings, drawings, photographs, and 3D objects in a 3D-rendered virtual gallery space.

The Walt Disney Family Museum received hundreds of contributions from adult and teen artists in the Bay Area and all around the world, including India, the UK, Spain, Finland, Romania, Nicaragua, and Australia. Submissions were then entered in a juried pool, with just over 175 pieces selected to be displayed in a virtual recreation of the museum’s Diane Disney Miller Exhibition Hall, which has previously hosted world-class exhibitions including Disney and Dalí: Architects of the Imagination; MAGIC, COLOR, FLAIR: The World of Mary Blair; and Mickey Mouse: From Walt to the World.

The exhibit itself is inspired by Walt’s ambition to constantly keep moving forward and create a better and brighter future and is organized by art medium. The user-friendly experience allows one to tour the Diane Disney Miller Exhibition Hall in virtual reality with 360-degree views and the option to zoom in and read about each submission and its artist.

The tour begins with brief visual instruction on how to navigate the virtual exhibit, and the quote by from Walt Disney, “Today we are the shapers of the world of tomorrow.” Scores of pieces cover the walls of two floors in a vast variety of pieces and mediums, each very unique to the artist.

The Walt Disney Family Museum is the latest venue to unveil a virtual exhibit for free to the public during these troubling times. Earlier this year, Inside the Magic reported on the British Library’s virtual tour of their exhibit Harry Potter: A History of Magic online for free as well.

You can virtually visit  “Lost Vegas” a Tim Burton exhibit at the Neon Museum, too!

Have you ever visited The Walt Disney Family Museum? Do you want to see more museums offering virtual tours? Let us know in the comments!