Say What? 5 Disney Movies With Different Titles Outside the US - Inside the Magic 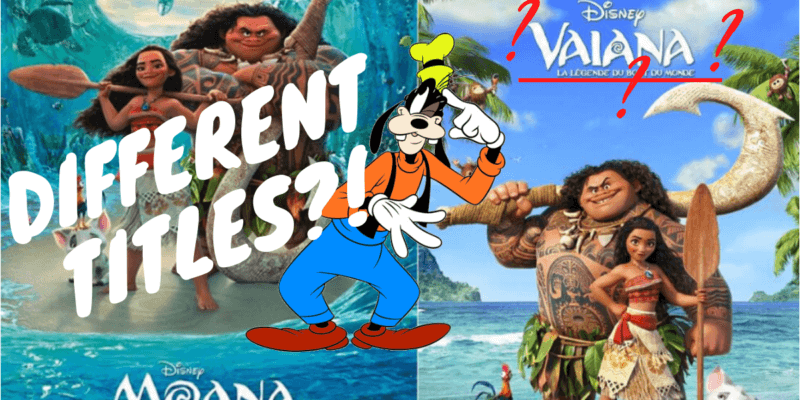 Localization of a film is always a tricky thing that can generate a fair amount of controversy. Many have recently pointed out that John Boyega’s Finn was problematically removed from the Star Wars: The Force Awakens poster in China, something that caused outrage in the Star Wars fanbase. However, some Hollywood changes are less egregious.

Disney movies have different names outside of the US

Sometimes, Disney movies can merely have their title altered in different countries or regions, and the reasons why range from bizarre to fascinating.

So, let’s see if your favorite Disney film has a completely different name outside of America.

Pirates of the Caribbean: Dead Men Tell No Tales may well end up being the last film in the Disney franchise to star Johnny Depp. In the UK and a handful of other countries, this entry into the most famous movie series based on a theme park ride is known as Salazar’s Revenge (something its director’s allegedly weren’t aware of).

There’s been no official word on why the change was made, but some theorise the original title was too close to home for Britain following recent terror attacks, so the character of Captain Salazar took the limelight instead.

Animated feature Moana is known as Vaiana in Europe

This Polynesian fairy tale won the academy award for best-animated feature and became an instant Disney classic. However, the titular Disney princess isn’t actually known as Moana in some European countries. The film was released in France as Vaiana and Oceania in Italy. Allegedly there is a famous adult film star known as Moana in Italy and Disney‘s Italian branch was afraid the film would become synonymous with the adult material.

While Disney has never confirmed this, Variety reported that Italian Head of Theatrical Marketing Davide Romani, acknowledged that they were ‘thinking about this issue.’ So this beloved Disney character is actually known as Vaiana or Oceania when she’s hanging with the Little Mermaid and co in some versions of Ralph Breaks the Internet.

Marvel‘s big team-up, The Avengers, is known as Marvel‘s Avengers Assemble in the UK

Now this one I can answer. The turning point film in the Marvel Cinematic Universe has a much clunkier name in the UK, due to fears that Brits would confuse it with the cult TV show of the same name. Hence, this Marvel movie took the ‘assemble’ line long before Cap finally said it out loud in Endgame. Thankfully, from Iron Man 3, to Black Panther, and now the Falcon and the Winter Soldier, we haven’t seen any alternate film or original series titles since.

Animated film Zootopia is known as Zootropolis in the UK

Every Disney fan loves Zootopia, but if you’re a Brit like me, you likely said; ‘don’t you mean Zootropolis?’ when someone first brought it up. There seems to be no rhyme or reason behind the change and all we have is the following – pretty unhelpful – statement. A Disney spokesman explained: ‘In the UK we decided to change the US title (Zootopia) to Zootropolis to merely allow the film to have a unique title that works for UK audiences.’ Right…

Disney movie The Mighty Ducks is known as Champions in Australia

If you’re looking for this classic live-action Disney movie on an Australian Disney Plus account, you might get a little confused. For unknown reasons, the film was released in Australia as Champions, while later home releases changed it to The Mighty Ducks are the Champions. Who knew!

BONUS: Harry Potter and the Sorcerer’s Stone is known as The Philosopher’s Stone outside of the US

This pretty well-known fact carries over from the books, after publishers allegedly thought that the word ‘philosopher’ was too academic for the US kid market. However, it wasn’t just the movie title that had to be changed! if you watch this classic film on an American Netflix account every mention of the philosopher’s stone is changed to the sorcerer’s. Check out this handy-dandy video that points all of them out!

Which alternate movie title surprised you the most? Can you think of any more examples? Let us know