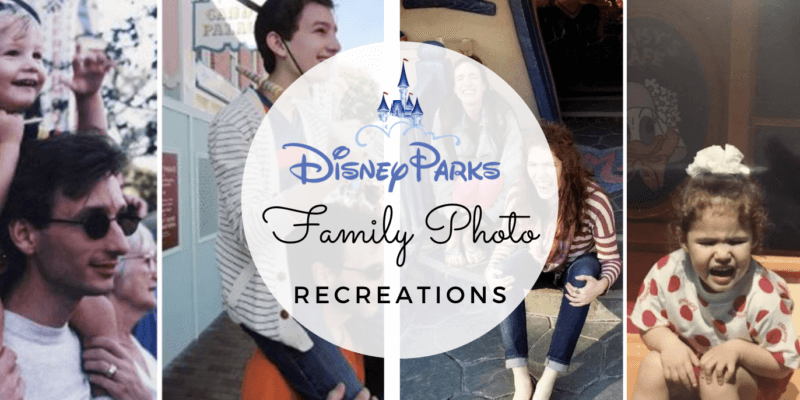 For many families, annual Disney World or Disneyland vacations are a tradition that continues for decades. The memories that are made during Disney vacations are undeniably magical and it can be fun to bring favorite moments back to life years later.

All of the families featured here have recreated Disney Parks family photos with adorable (and sometimes hilarious) results!

I’ll kick things off with my own Disney recreation: My sister and I showing off our personalities in Toontown, then and now.

This father-daughter duo took these two adorable Disneyland photos a decade apart. The first image was snapped in 2006 and the recreation in 2016!

The pictures were shared by Reddit user Brixnivy who said, “2006 and 2016…looking forward to recreating this again.”

The blogger behind You’re My Favorite Today shared this cute Walt Disney World family photo recreation of her cute fam in front of Cinderella Castle on Main Street, U.S.A.

Taken 12 years apart, we love how the family rocked the exact same ear hats they wore in their original WDW photograph!

Reddit user Clephtis shared one of our favorite Disneyland photo recreations of him and his dad during a Disney Parks parade.

In his post, Clephtis said the original image was taken in 1997, while the recreation was staged in 2012! We bet both of these father-son photos are framed in his parents’ home!

Reddit user Screamicide shared this incredibly cool retro Disney photo recreation with the caption, “My father and I (2001) recreating this photo of him and my grandfather (1971). Can’t wait to do the same one day with my son.”

In an interview with HuffPost, Rush said, “Even on a vacation, which is a break from the everyday, it is so easy to fall in line with what is expected of you. Go see this tourist attraction, go see that, ride this, wait in line here. Even at a place as ready-made magical as Disney World, bringing a little of your own creativity can elevate the experience.”

Do you have your own Disney family photo recreations to share? Tell us in the comments!