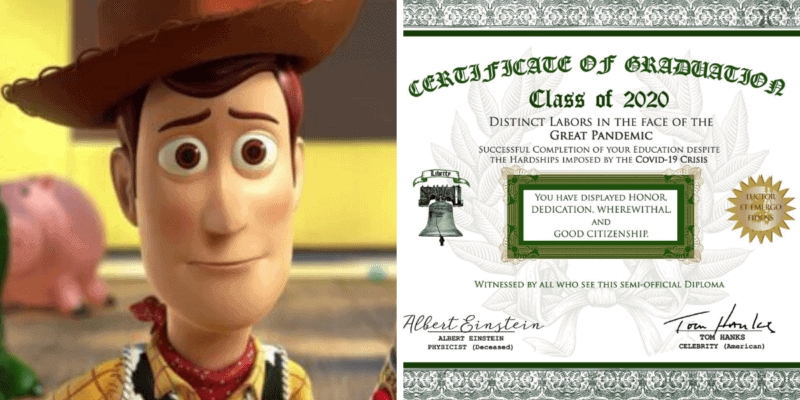 The class of 2020 has been affected by the global pandemic unlike any other group. Their graduation ceremonies have been completely derailed. There have been several attempts across social media to give the graduates something special, and now legendary actor Tom Hanks has stepped up to the plate.

According to The Hollywood Reporter, Hanks has decided to offer all 2020 graduates a special diploma.

Hanks shared the diploma on Twitter, saying, “To all the Grads of 2020, you Chosen Ones! Print this up on a sheepskin! Hanx.”

The diploma awards the graduates for “Distinct Labors in the Face of the Great Pandemic” and declares “You have displayed honor, dedication, wherewithal, and good citizenship.” It is signed by Hanks and Albert Einstein.

To all the Grads of 2020, you Chosen Ones! Print this up on a sheepskin! Hanx pic.twitter.com/4llw7fPtxB

Hanks also took the opportunity to send a special shout out to his Alma Mater, Skyline High School. He congratulated those graduates specifically and shared his senior class photo, writing, “Big Day for Skyline High School in Oakland, CA! Glad to be a part of it! Hanx, ’74.”

Big Day for Skyline High School in Oakland, CA! Glad to be a part of it! Hanx, ‘74. pic.twitter.com/XWna7mdiYa

The star of Saving Mr. Banks and the Toy Story franchise has been a recurring character in the ongoing pandemic story. He and his wife, Rita Wilson, were the first American actors to be reported as testing positive for the virus while on a trip to Australia. Upon making a full recovery and returning home, both Hanks and Wilson donated blood and plasma for research searching for a vaccine (or as he called it, “a Hank–ccine”).

Now, he has joined others such as The Lion King producer Don Hahn in going the extra mile for this graduating class who have not been able to have the ceremony they’ve been waiting four years for.

But this is not the first time Hanks has gone out of his way to show encouragement during this difficult time. In April, Inside the Magic shared the story of how Hanks and his wife shared their support for an eight-year-old fan who was being bullied because his name was Corona.

Through these acts in the face of difficult times, it appears Hanks is striving to live up to the anthem of Toy Story: “You’ve got a friend in me.”