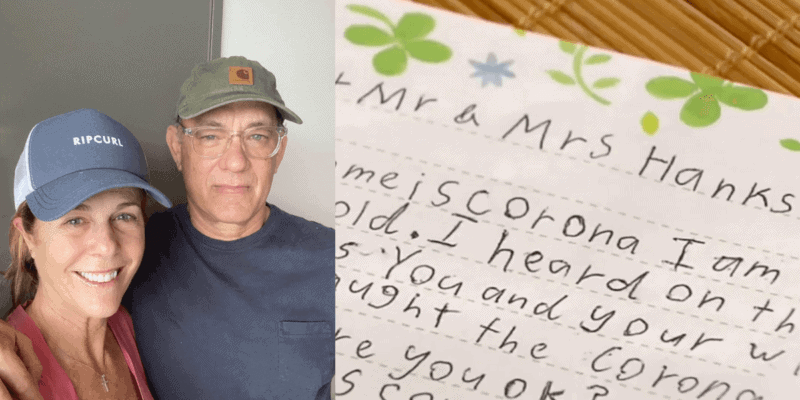 The spread of Covid-19 over the last few months has brought out contrasting emotions in people. During this incredibly stressful time, we should all be kinder and more understanding with each other.

But unfortunately, despite all of the good happening in the world right now as a response to the pandemic, these events have also incited hate and bullying.

A Bullied Fan Reaches Out

After experiencing bullying at school, a young fan of Disney’s Toy Story films named Corona, recently wrote Tom Hanks a letter asking how he was doing.

In early March, the actor and his wife — Rita Wilson — had taken to social media to share that they had both tested positive for the Coronavirus while in Australia for a film project. The two had been isolated together, continuously sharing uplifting messages and updates to fans. They have since recovered and are back in the United States.

The eight year old’s letter started off with concern for the health of the famous duo saying, “I heard on the news you and your wife had caught the coronavirus. Are you OK?”

He went on to share with Hanks how despite loving his unique name — Corona — with the spread of the virus worldwide he had been getting bullied at school for it. “I get very sad and angry when people call me this,” he wrote.

Actor Tom Hanks Thanks Fan For Being A Good Friend

Hanks, clearly moved by this honest and heartfelt letter, made a point to not only reply to his young fan with encouragement, but to send a gift!

He wrote, “Your letter made my wife and I feel so wonderful! Thank you for being such a good friend – friends make friends feel good when they are down.” He added in a thank you for making him feel better and said, “You are the only person I’ve ever known to have the name Corona – like the ring around the sun, a crown.”

The beloved Toy Story actor wrote his reply on a Corona brand typewriter — one of his well known collectors items that he’d had with him in Australia. Once the letter was finished, he sent the typewriter along with the letter, back to young Corona as a gift of encouragement.

“I thought this typewriter would suit you,” he said. “I had taken it to the Gold Coast, and now, it is back – with you. Ask a grown up how it works. And use it to write me back.”

If this isn’t a heartwarming story, I don’t know what is. We are grateful for Tom Hanks and his act of kindness in replying to this young fan, and thank anyone else who is working to spread kindness and joy in the world right now!