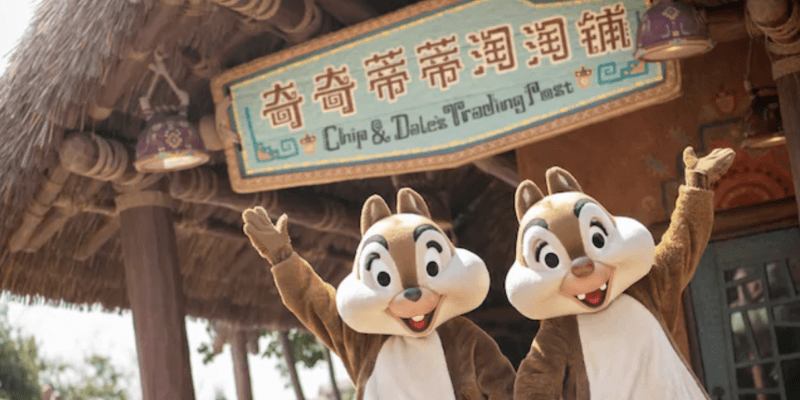 While we wait for the U.S. Disney Parks to announce their reopening dates, we can live vicariously through pictures and videos of Shanghai Disneyland Resort, which opened earlier this week.

Although the experience at Disneyland Shanghai is not the same as it was before the temporary park closure, theme park goers and Disney characters alike seem to be making the best of the situation.

Today, Chip and Dale appeared as exuberant as ever when they opened a brand new store, Chip ‘n’ Dale’s Trading Post, at the Shanghai Disney park.

As per the Shanghai Disney Resort website, “Chip & Dale have come to Adventure Isle in search of the legendary giant acorn and set up this trading post as a base for their explorations. Pique your curiosity with all the fun apparel, toys, plush, accessories, as well as unique items collected by these lovable chipmunks. You can also take your chance at Chip ‘n’ Dale Lob-A-Log!”

As big fans of Walt Disney Animation’s cheeky chipmunks, we can’t get enough of this new Shanghai Disney Chip and Dale store!

What Does Shanghai Disney’s Reopening Mean For U.S. Parks?

Aside of confirming that Walt Disney World Resort will operate at limited capacity upon reopening, the Walt Disney Company has said little regarding specific health and safety protocols for Disney World and Disneyland. Fans in the United States have mixed feelings about face masks and other safety regulations.

It remains to be seen how many of Disneyland Shanghai’s new requirements will be directly translated to WDW and DLR upon their respective reopening dates.

If we ever get the chance to visit Shanghai Disneyland and the Enchanted Storybook Castle, we’re definitely going to stop by this adorable new Chip & Dale shop!