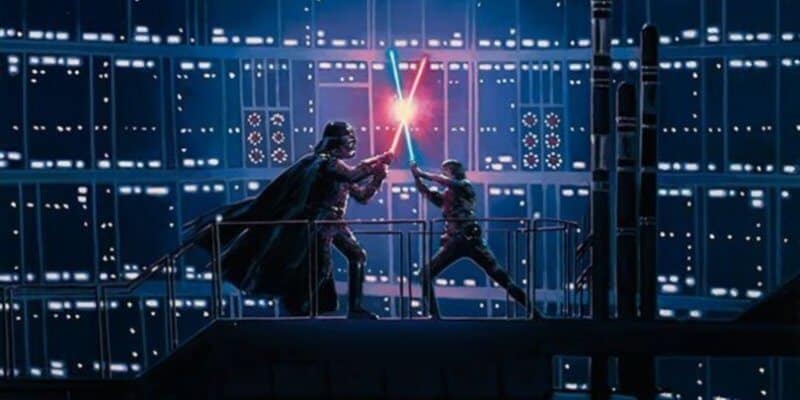 "It's Useless to Resist" by Rodel Gonzalez

If you are a true Star Wars fan, you are probably going to freak out by the Star Wars Disney Art collection by Rodel Gonzalez.

The Star Wars – The Art Collection of Rodel Gonzalez features Star Wars characters like Yoda, Baby Yoda, the Sith Lord, Darth Vader, BB-8, Luke Skywalker, and more. The artwork also features scenes like the Battle of Endor, Darth Vader and Luke’s Fight, the Battle of Yavin and many others.

In this collection, Rodel plays with the use of light and shadows to create the mood in his paintings. This use is also interesting in this collection specifically, since the Star Wars franchise is all about battling the “dark side.”

The precise use of light and dark tones, not only sets the mood and references one of the main ideas of the movie franchise, it also helps to highlight the lightsabers!

The paintings in this collection is available for purchase on Disney Art on Main Street website.

Rodelio Gonzalez is a Philippine artist famous for his realistic artworks, and limited editions Disney artworks.

Rodel is one of the licensed Disney Artists with his work being sold around the world in art galleries throughout Europe, Japan and North American, as well as through Disney Theme Parks and Disney Cruise Lines.

“Up Above” I realized that I haven’t featured a lot of my old works on IG. So I’m digging my art folder and sharing with you some originals that I have done for your pleasure. This piece was sold long time ago and it’s hanging at a home. If you happen to have this piece, please comment so I can thank and congratulate you personally. I apologize in advance, I’m sure we probably have met in the gallery and took a picture but with the many friends and collectors that have purchased my art, I need your help to remind me. Thank you!

Rodel came from a family of artists, and at an early age, he was encouraged by his father and grandfather, who were also painters, to interact with paint and a canvas. “Growing up my father would always tell me to not be intimidated by the paint and be 100% sure about my intentions on my first stroke at the canvas,” said Rodel on his Meet The Artist page on his website.

Related: Artists reimagined Disney Princesses with short hair and the results are amazing

“Dandelions in a Breeze” 16×20 featuring Pooh and Piglet. When I paint some of the best pieces I’ve done are the ones that I do in a few hours because you’re just in the zone and all your brushstrokes are right on. Love those moments on the easel.

Rodel also shares that Disney was part of his childhood. “I remember watching my first Disney films Bambi and Snow White and ever since I’ve been mesmerized by the succeeding Disney movies I’ve seen.”

Rodel’s work fluctuates between all the Disney spectrums, all the way from the Disney princesses and their castles to Mickey and his friends, Star Wars, Pixar movies, etc. “I believe a painting is a mirror of the painter’s understanding of an insight he has. The Disney paintings each involved such a strong concept that every brushstroke was a joyful anticipation of the finished product. The energy was very strong therefore my intentions were sure and refined. I would say that there was a lot of grace present on every painting, Rodel writes on his website.

During an interview for Enchanted Paintings in 2013, Rodel said that his favorite Disney movie is The Lion King because of Mufasa and Simba’s relationship.

During the same interview, Rodel said he he uses his imagination when painting; he paints what he feels and not what he sees.

“Mike takes the mic” 11×14 original in oil. If you want to see it in person it’s at the Wyland Gallery at Disney Boardwalk hotel plus a few more new originals. Check them out!

You can also keep up with the artist’s new creations through his Instagram page.

Are you a fan of Rodel’s paintings? Which one is your favorite? Let us know down in the comments.