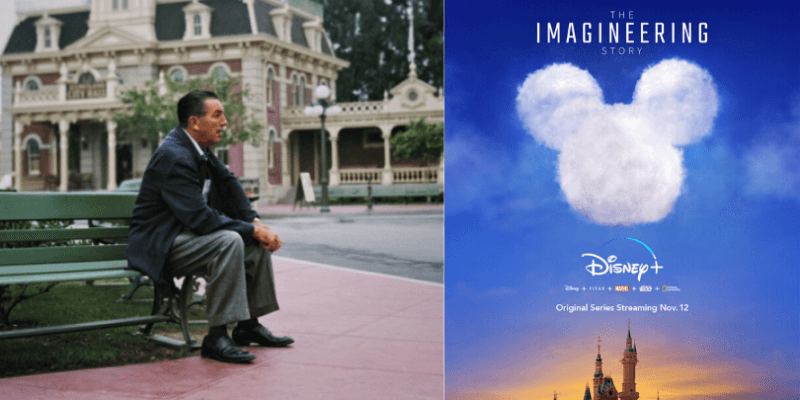 The Imagineering Story has significantly impacted fans’ lives since the series first debuted on Disney+ when the streaming service launched last November. But after the show’s six episodes were through, many fans were left questioning, When can we get more?!

On a recent episode of the D23 Inside Disney podcast, Leslie Iwerks — daughter of Disney Legend Don Iwerks and granddaughter of Ub Iwerks — and Bob Weis — President of Walt Disney Imagineering — shared the inside scoop behind the fan-favorite Disney+ series The Imagineering Story, including what we can expect up next.

Iwerks shared that The Imagineering Story was a collection of everyone at Disney’s contributions, and no one person got a dedicated slice of everything they did.

“We were able to look at it as a big whole of a tapestry of everybody’s contributions and how they all intertwined and worked together,” Iwerks said.

But even in creating such an epic compilation of Disney Parks history, it was inevitable for the team behind The Imagineering Story to have to leave some content out. But as it turns out, they were left with a lot more material that didn’t make the final cut.

One element of The Imagineering Story that did not make it in the finished product was an interview with Susan Hoose, one of the original Disneyland mermaids.

“We found her through a lot of digging on social media and contacted her, and I had a long conversation with her over the phone and she had these really amazing stories,” Iwerks said.

They flew Hoose out to southern California and interviewed her at Disneyland right in front of where she used to work, the lagoon in between Fantasyland and Tomorrowland where the Finding Nemo Submarine Voyage is now. They even found archival footage of Hoose, and during her interview, she told the story of how she went straight from school to go to the Disneyland audition.

“But at the end of the day we ended up cutting it because it just felt a little bit tangential to the Imagineers,” Iwerks said. “It was more about the Cast and her story and it sort of took us off the main thread.”

But deleted scenes went beyond stories of Disneyland mermaids and the Yippee Day protests when young people invaded Disneyland in the 70s to protest the war. Weis and Iwerks shared that the Disney+ series originally included scenes of Pooh’s Hunny Hunt (the groundbreaking Winnie the Pooh dark ride at Tokyo Disneyland), Expedition Everest at Disney’s Animal Kingdom, Horizons at EPCOT, and even Castaway Cay.

There’s tons of “golden” interview footage that they weren’t able to fit in. Even Cast Member training films and attraction testing videos pulled from the Walt Disney Imagineering archives, which fans would have loved to see, couldn’t make the final cut of the series.

But given the surplus of material that Disney already had to work with, and given the many Imagineers who weren’t interviewed the first time around for the six-hour series, does that mean we could get more episodes coming to Disney+ in the future? Maybe even a season 2?

“I think there could have been so much more on Disneyland alone,” Iwerks said when asked if another series would be possible. “There’s a lot of archival footage about Disneyland. So if you wanted a really deep dive look into that, I think there’s a series even on that…It’s amazing, there’s a kind of material that people don’t even know exists.”

She even said that there could possibly be a series on the 100-year history of The Walt Disney Company since the 100-year anniversary is coming up in 2023.

Weis said, “We certainly believe the Imagineering story is not finished — we’re constantly doing new things, we’ve constantly got new projects underway, we have so much even in our immediate future in the next few years.”

These remarks certainly give us hope.