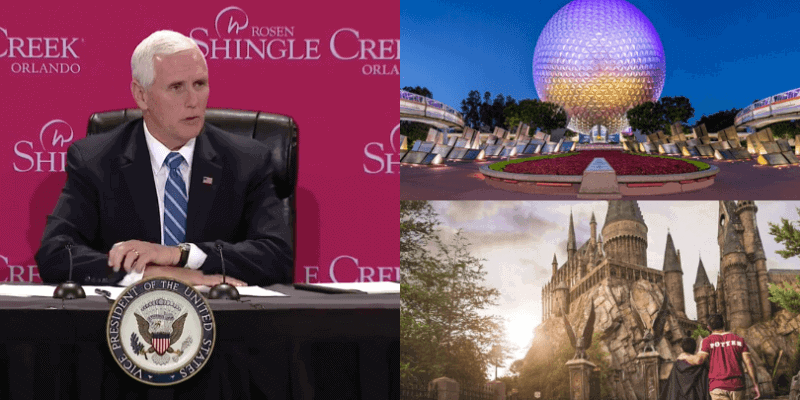 Vice President Mike Pence joined Florida’s Governor, Ron DeSantis in holding a roundtable discussion in Orlando, Florida with representatives of the theme parks and other leaders in the tourism industry. During that time he gave special praise to the Walt Disney World Resort and Universal Orlando Resort for the charitable work they have both done during Florida’s statewide pandemic shutdown.

Reading a piece of paper handed to him he received upon arriving at the roundtable even, Pence said, “I’m told Walt Disney World donated 35,000 N95 Masks to the FL division for emergency management as well as 700,000 pounds of food to Florida food banks. I think that’s worth a round of applause…and Universal Orlando donated more than 50,000 ponchos to the City of Orlando, to local fire departments as critical PPE to first responders and also donated 30,000 pounds of food to Central Florida food pantries. So let’s hear it for Universal Orlando.”

“Because of your generosity,” he added, “families were able to see their way through this challenging time.”

John Sprouls from Universal and George Kalogridis from Disney had a chance to speak to both the Governor and Vice President. Both gave updates into the changes being implemented from face masks and limited capacity to areas remaining closed as well as their gratitude for everything that the state and federal administrations have done to keep both resorts going and to get to the point of reopening Disney Springs and Universal’s CityWalk.

“Thanks for rolling up your sleeves and doing the right thing,” Pence told Sprouls after hearing the measures being taken at Universal’s CityWalk, “and tell your whole team that.”

Pence then turned his attention to George Kalogridis and Walt Disney World.

“I again want to commend Disney. I remember the meeting in the cabinet room at the White House-am I right in remembering that Disney has never closed for more than a day?”

Kalogridis reminded Pence that Disney World closed on 9/11 and two days for a hurricane.

“Well, it was a tremendously admirable decision that you made.”