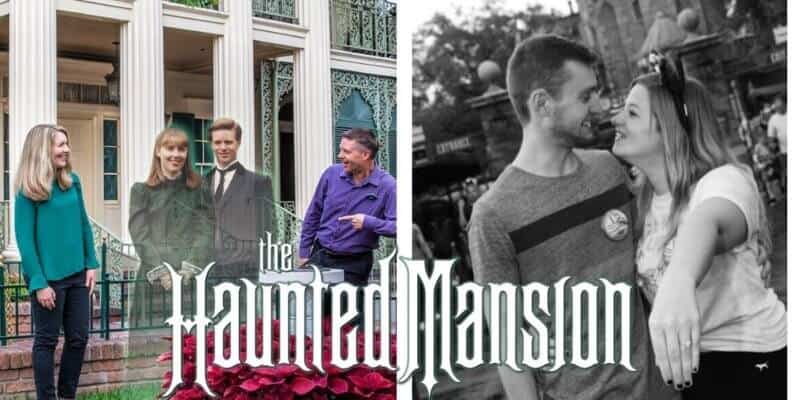 When one thinks of falling in love, Haunted Mansion may not be the first thing that comes to mind.

However, there are a few people out in the world who just adore Halloween, all things frightening, and of course, Disney’s classic attraction — The Haunted Mansion.

One article, written by Editorial Manager for Disney Parks Blog Lisa Greathouse, shares the story of two Haunted Mansion cast members who fell in “love at first fright” in 1989. Check out the magical story below.

Enjoy this #DisneyCastLife story below!

Senior Stage Manager Dave Atkins will never forget the day in late 1989 when, as part of the opening crew on Splash Mountain, he began cross-training on Haunted Mansion and spotted a new hire who was part of a different training group.

“It was love at first fright,” Dave says with a laugh. Eve, that “new hire” who caught Dave’s eye 30 years ago, rolls her eyes. “That is such a dad joke,” she says.

The couple, who began dating a few months after first meeting, recently celebrated their 26th wedding anniversary and have two sons, ages 16 and 19. “They think it’s pretty cool that their parents met at Haunted Mansion,” says Eve, who left the company in 1994 for a career in Human Resources.

Dave, who works in Disney Photo Imaging, says the couple’s circle of friends include many Cast Members (past and present) they met working in New Orleans and Critter Country during the 1990s. He even recalls sitting in a circle in the mansion’s expanding room with fellow Cast on Halloween night after the park closed, telling ghost stories late into the night.

“Haunted Mansion is still my favorite attraction — and not just because I met this incredible woman there,” Dave says, glancing at Eve. “It’s an attraction that is better than it needed to be, full of so many little details and incredibly rich storytelling. Anyone who has trained on that attraction has stories that build on the lore. There’s always a little bit of mystery.”

These cast members aren’t the only ones we know of who fell in love “at first fright”. One of our own Inside the Magic editors, Kelly (myself), was recently proposed to right in front of Haunted Mansion at Walt Disney World Resort.

Last October, Matt and I had a vacation planned to go to Disney World and attend Mickey’s Not So Scary Halloween Party. When we finally arrived at Magic Kingdom, we decided to go on Haunted Mansion first. But before riding the attraction, Matt wanted to take a photo in front of Haunted Mansion, which if you know who Matt is, this was very strange since he isn’t a huge photo person.

But of course, I had to take advantage of this rare opportunity, so we headed over to the front of Haunted Mansion to kill some time. When it was our turn for our photo, we did a normal posed photo and then a fun magic shot. I was about to step away and scan my band when I heard my boyfriend say, “Wait, let’s do one more.”

I turned around to go back to pose for one last photo and there he was, down on one knee. My jaw dropped, my hands started to shake, and the tears started flowing as people crowded around us and started to cheer. (Of course, I said yes.) You can read all about the story of Kelly and Matt’s engagement here.

Are you a lover of Haunted Mansion? Do you have any stories to share? Let us know in the comments.